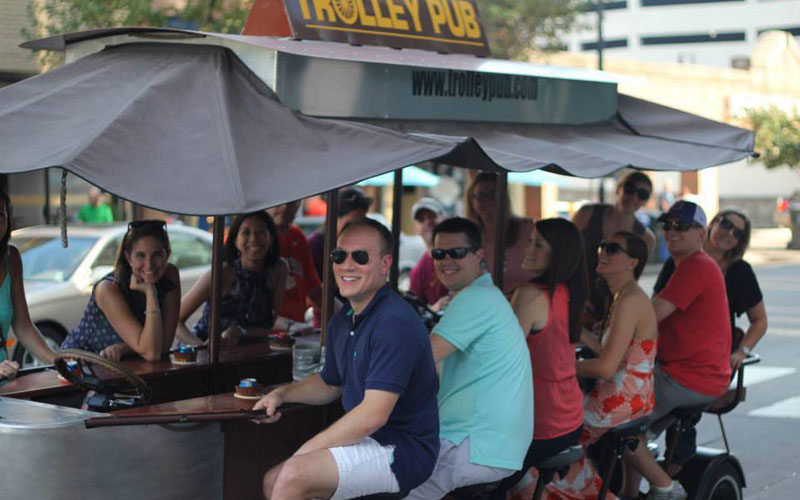 Pub crawling is tons of fun, but a new downtown feature is about to make it even more fun than that! Imagine doing your pub crawling in a trolley that chauffeurs you from place to place. Now imagine yourself being one of 6 to 14 people who are actually making the trolley move via pedaling! And yes, you can also drink a beer on board– for the time being, anyway.

The state of Michigan just passed an ordinance last spring that makes operating BYOB beer trolleys legal. Now the city of Ann Arbor has to decide if they will follow the state’s ordinance in full, or implement modifications. This could mean limiting the drinks each person has on board, or even forbidding alcohol on the vehicle altogether. In that case, the trolley will ultimately still serve as a fantastically fun way to get one from one pub to another.

In the meantime, Trolley Pub Ann Arbor is set to start its route on Friday, September 25th. Normally one would have to book a ride ahead of time on the Trolley Pub’s website, but on opening weekend free tours are being offered whenever there is free space. The trolley can only operate with a minimum of 6 people pedaling and holds up to 14. And, yes, you can book the whole thing for a private party, if you like.

For now all passengers are allowed to bring two beers or glasses of wine on board with them. No hard liquor is permitted.

Concerned about all those beer-drinking folks driving around downtown? Not to worry– the trolley is steered by a sober driver who is hired by Trolley Pub and has full access to a good set of brakes!

The route follows a square shape in downtown Ann Arbor, going down Main Street from Catherine, over to East Williams and down 4th Avenue. You can pick it up anywhere along the way.

10am-midnight, Saturdays & Sundays (although for Opening Weekend it will operate on Friday, September 25th)
$375 for 14-people for a 2-hour tour, or $30 for a single ticket
Downtown Ann Arbor
734-956-0436
annarbor.trolleypub.com | facebook.com/trolleypubannarbor