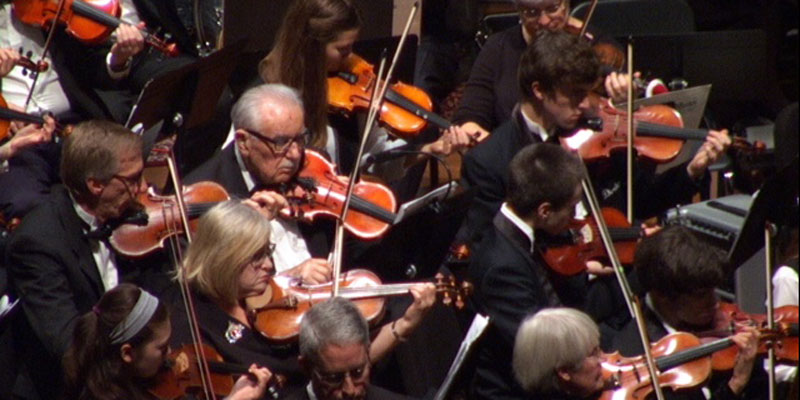 The Dexter Community Orchestra (DCO) boasts players of all ages, beginning in their teens, but is particularly proud of its oldest player who reached 96-years-old in December. Stan Sekerka loves playing music and will again join the orchestra in the 2016 opening concert on February 21.

Born of pre-WWI settlers, from the then Austrian Hungarian Empire, Stan inherited his parent’s determination. His father arrived in America with only about $20 in his pocket. Stan laughs and tells the tale about how his father, seeing that another man that needed the money more, gave it all away.  He survived and ended up in Toledo, Ohio, and married his wife, who arrived several years later. That’s where Stan was born and raised.

His father became a professional musician and instilled in him a love of playing, first teaching him the violin, then encouraging music lessons at elementary and high school. At 16-years-old, the younger Sekerka started a Czech polka band which fast became popular at weddings and parties. He played the trumpet and violin in the band.

Sekerka continued his love affair with music at the University of Toledo just before WWII, by joining the university orchestra, then became a member of Toledo’s 148th Infantry Band. During the war, he served his country and continued to proudly play for the band. Based in Texas, he also worked in the army post office. “I was lucky though,” he said, adding, “when many of the band went to the South Pacific, I stayed safely at home.”

After returning to the midwest after the war, Sekerka finished his studies and began a teaching career, eventually becoming a principal. He married, and had three children to whom he also passed on his love of music. He taught them piano and encouraged them to play other instruments. “They don’t play anymore though and I gave up playing for one reason and another for about 50 years,” said Sekerka.

Jeff Ash, DCO President and a horn player, notes though that Stan tells young and old, “Never Stop, but if you do, you can always come back.”  Sure enough, when Sekerka and his family moved to Saline, he found music again. “My church found out that I could play the violin and asked me to join their orchestra,” said Sekerka. He also joined a doctor’s orchestra performing in Prague, Budapest, Hawaii, the Kennedy Center, and the Crystal Cathedral, and has also played with the Livingston Orchestra, Ypsilanti Orchestra, Tecumseh Orchestra, and of course, the DCO.

At the DCO, his wit and determination is an inspiration to many. “Stan always wears a funny T-shirt or sweatshirt that has a musical theme,” said Ed Winfield, Sekerka’s orchestra stand partner. “One says ‘Be Happy Don't B Flat.’ I think he has one that says ‘My Other Violin is a Strad.’”

“We all admire Stan for his continued dedication to the orchestra and hope we can be playing music when we get to his age.”

Winfield also noted that, “We joke with each other not to play during the times when we are not supposed to play; in other words, don't play during the musical rests.” Well, Stan’s sense of humor took over one day, as Tony Elliot, DCO conductor and distinguished cellist and professor of music at UM stopped the orchestra during rehearsals to talk about the music. “This took a few minutes,” said Ash. “When he had finished, Tony noted that it was time for our rehearsal break, at which point Stan piped up, that we’d already taken a break listening to Tony!”

Good thing Elliot has a sense of humor. “Coming to the Dexter Community Orchestra rehearsals has always been a joy for me as Music Director, but also a learning experience. One of my “teachers” sits in our second violin section,” said Elliot. “Stan Sekerka, alias “Stan the Man” — he does have a sweatshirt that proclaims this — has been truly an inspiration to us all. Stan turned 96-years-young this last December 14.  To say that he is sharp would be an understatement.  His perspicacity and wry humor are omnipresent. Up until a few short years ago, Stan was driving himself to rehearsals. Now while he leaves that responsibility to others, he is absolutely devoted to being there, contributing, and doing his best.  His love of music making is truly infectious, and we are fortunate to have him among us!”

Sekerka’s humor, always on display with the DCO, has carried him through life. “When the doctor asks me how I feel, I just say, I can’t see very well, I can’t hear very well, and I can’t walk very well, but other than that, I feel really great,” said Sekerka. “I’m going to keep playing as long as I can though. When I can’t see the music score any more, then I’ll just improvise.”

Stan also inspires Laura Hogan, who will play Principal Flute in “Debussy’s Prelude to the Afternoon of a Faun” for the DCO February concert. Hogan, a graduate in Flute Performance at Central Michigan University, after 27 years of marriage and raising two children, had to face a very difficult life challenge over the last year.  Diagnosed with non-Hodgkins lymphoma, she suffered through chemo and radiation treatments, eventually, and happily, becoming cancer-free. Through the process, Hogan didn’t miss a DCO rehearsal or concert, and notes, “During the rehearsals and concerts, I'd be surrounding by friends, and music, which was the best therapy there is! Although I don’t know Stan well, he is truly an inspiration. I am always amazed at his dedication and his passion for music. He is a role model for me. I hope I can still play when I'm his age.”

Both will perform in the February concert, where DCO will also perform “Echoes from an Invisible World” by Leslie Bassett and “Concerto for Two Pianos” by Francis Poulenc. DCO will also be joined by Pinnacle (Iman Habibi and Deborah Grimmett) for the Poulenc work. Together with the Debussy piece, these works span roughly 80 years of composing.

DCO, founded in 2005, is dedicated to cultural enrichment through symphonic music.  Board member Angie Noble’s mantra is, “We believe music is the touchstone of life. We love to play music and we enjoy being out in the community doing what we love to do.” That sums up Sekerka’s sentiments as well.

“I value the value of the notes of the music. I just love to play.”