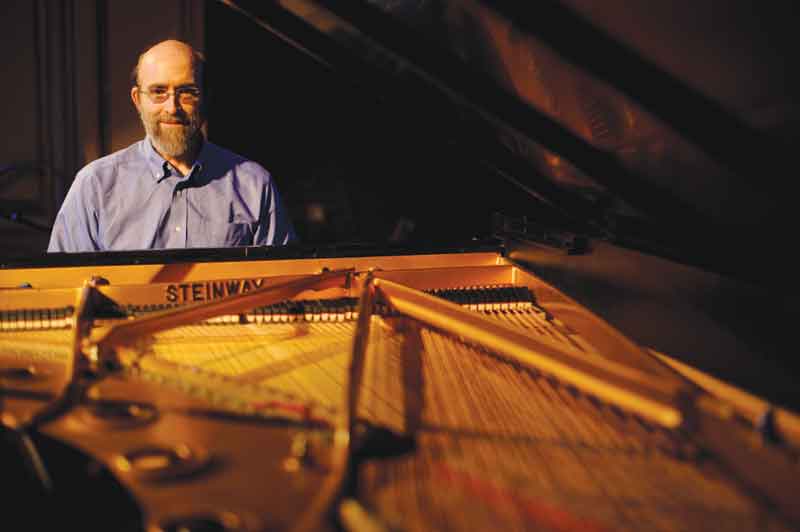 George Winston’s take on Vince Guaraldi’s Christmas classic, A Charlie Brown Christmas, will surely be on display at The Ark on December 20, but Guaraldi is only one of Winston’s inspirations—Professor Longhair and Gobijee the cat also shape the pianist’s R&B style.

How did you know that solo piano, as opposed to playing in a band, was your musical path?

It was 1967 when I heard The Doors first album, which inspired me to play the organ and get into a band. I played in a couple of bands, but it wasn’t quite right. I hadn’t played for very long. And then in 1971 I heard Fats Waller’s piano recordings from the 20’s and 30’s, and I immediately realized, solo piano, not organ, for me. And then I started playing Vince Guaraldi tunes and made up the folk piano style to compliment the stride piano style. Mainly what I work on now is New Orleans Rhythm and Blues. Over the last 35 years, that’s been my main influence. I quit playing in ‘77 and in ‘79 I heard Professor Longhair’s recordings. And I said, I gotta start playing. Having these mentors makes such a difference.

You tour prolifically. I’d love to hear about one of the most memorable places you’ve played.

Dillon, Montana. Just east of Missoula. Their high-school auditorium. I never mic a piano, but usually I mic the acoustic guitar. During sound check I said can you turn the mic down? It wasn’t on. So I went wow, nobody should touch this hall. It’s the best acoustic hall on the planet.

As a pianist that is inspired by nature, do you ever play outside?

Oh, no. I don’t like that. There’s no acoustics and there’s noise. The piano goes out of tune. No, I never play outdoors. If I go to the Grand Canyon, the last thing I want to do is have a piano.

You are well known for playing Vince Guaraldi’s Peanuts Soundtrack, but how do you make it your own?

I’m not a jazz pianist. So if Vince Guaraldi has a jazz solo, I’ll have an R&B solo. The way I play, the jazz thing didn’t feel right or sound right, but over time the R&B thing did.

You’ve done so many albums to benefit causes. Where do you find inspiration? Does the music come first or does the cause come first?

I want to do something, just like everybody wants to help out. The next one is called Spring Carousel: A Cancer Research Benefit, benefiting City of Hope –a research center in LA. I just want to do something, you know, and I’m not a very good carpenter so I’ll do a benefit record. The benefit album happens if there’s music. For example, there’s an EP for the Fukushima disaster and I play several Japanese songs. I’ve thought of Somalia, but I just have no music. I do some Korean pieces. After the wall falls someday there are going to be a lot of refugees, kind of like East Germany in 1989. So I’ll do that benefit album when that happens. The music has to be there … I do what the music tells me to do. Music is like cats: the song does what it wants to do, not what I tell it to do.

I noticed the name of your record label is called Dancing Cat Records.

I love cats more than anything. I had a cat that stood up to get his head scratched. The logo is him. His name was Mifffffffffff. I learn everything from cats.

What have cats taught you about piano and performance?

This one cat, Gobijee, was very much part of my right hand. The way her meow chirped, Gobijee just gave me the reason to exist. Just the whole reason, everything. It’s not really expressible. It’s just the reason to play, everything. She didn’t have a meow. So I always say the being I learned the most from did not say one word to me, it was all by example.