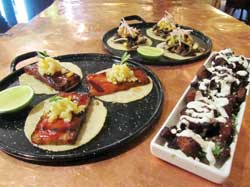 Before returning to Ann Arbor to start Mani Osteria (see our September 2011 review), Adam Baru worked for Iron Chefs Morimoto and Garces. So it was a good bet that he wouldn’t be stopping at one restaurant. The only question was whether new endeavors would knock it out of the park like Mani has. He and Chef Brendan McCall have answered that question with a resounding yes.

It’s a challenge to succeed with an upscale Mexican restaurant in the US outside of major dining cities. Most Americans (unfortunately) associate Mexican food with Taco Bell. More knowledgeable Mexican food aficionados have mostly been exposed to inexpensive taquerias, or maybe family restaurants where the menu pretty much tops out at $10 for carne asada a la Tampiqueña. We love those places ourselves, but it’s still not upscale dining.

Isalita is upscale, though not crazily so, and Ann Arbor’s diners have taken it into their hearts at lightning speed. It shares a basic concept with Mani Osteria: small plates, so you can share a variety of tastes, with high-quality ingredients and intense flavors. Like Mani, it isn’t cheap—but it isn’t expensive either — and it’s definitely worth it.

One way Isalita conceptually differs from Mani, though, is that while Mani’s menu mostly hews closely to traditional regional Italian fare, Isalita may start from traditional Mexican dishes, but usually flies off in some creative and tasty direction. Baru and McCall are striking a balance with the menu. On the one hand, they don’t want to scare off people who just want some good Mexican-inspired food to go with their excellent cocktails. “We originally thought customers would see us as a bar with great food,” McCall told us. “We were surprised by how much the food took off!  It made things crazy in the kitchen, because we hadn’t planned for the capacity!”

On the other hand, they’re serious about Mexican food—Baru’s wife is Mexican, and they’ve made multiple jealousy-inducing research trips—and they use some very authentic and obscure ingredients. Mundane things like quesadillas don’t crowd any of the menu’s limited real estate, though you can still get them for your kids. The upshot, though, is that while everything on the menu is very flavorful and artfully prepared, and some of these tastes will expand your horizons, there’s nothing scary, or even excessively hot.

Here, our recommendations:
Truffle Guacamole — Creamy mashed avocado, cilantro, and jalapeno mixed with huitlacoche (a.k.a. “corn smut” or more appetizingly “corn fungus”) vinaigrette and a bit of truffle. Very silky texture. Even the member of our group who normally won’t eat avocados (due to overexposure as a kid) really likes this.

New Salsas —The new salsas—Roja, Verde, and Manzana—are worth checking out. The Roja is a blend of roasted tomatoes and chipotle, the Verde is made with tomatillos and cilantro with avocado, and the chunky Manzana salsa is named after the yellow-orange chiles that give this salsa its spicy heat.

Elotes (grilled corn on the cob) —  With the toppings, it’s a spicy dish and amazing. But if you can’t eat dairy (like some of our group), it’s still a really delicious grilled corn cob with lots of good smoky flavor.

Ceviches
Spicy Tuna — Mexico meets Japan with this dish of slices of cool, clean-flavored raw tuna kicked up by the strong flavors of pickled onions, serrano, lime and toasted coconut.

Shrimp Coctel — Served in a sundae glass, this beautiful and fun mix of shrimp with avocado and orange is topped with a refreshing granita made of sangrita raspado.

Carne Asada – Their newest taco; it’s a star. Grilled steak has a good char flavor and combines well with a touch of refried beans. Pickled onion and salsa roja tie it all together for an amazing punch of savory flavor.
Baja Fish – A crunchy “log” of fried fish topped with pickled cabbage and served with avocado and chipotle remoulade.  The fish is quite delicate in flavor and the cabbage strong, so if you may want to play with the amount of pickled cabbage you have for each bite.

Tacos Al Pastor — Traditional al pastor is pork marinated with dried chiles and cooked on a vertical spit (trompo) with onion and pineapple. Isalita took a page from Mani and went for pork belly, in this case with a guajillo chili glaze topped with pickled pineapple. The pork belly just melts away in the mouth. Wonderful, porky, salty-sweet, with the spiciness countered nicely by the pineapple.

Miscellaneous Items
Carne Nachos — Skirt steak and refried beans, over a bed of chips, topped with decadent crema and fresh diced tomatoes and jalapenos.  Isalita’s fondness for allspice (and cinnamon) shows in this dish; those were sensitive to those flavors found them too strong, while others really enjoyed it. Beware the hot (seriously HOT, they are not joking) handle!

Chopped Salad with grilled shrimp —  A huge bowl of chopped Romaine mixed with roasted corn, beans, tomato, and tossed with a cumin vinaigrette; not your ordinary chopped salad. We got ours with grilled shrimp. It’s hard to overstate how delicious the shrimp were.

Enchilada Roja — Two enchiladas; tortillas wrapped around chicken and topped and wonderful mild red chili sauce and both crema and queso blanco. Very rich, but with great flavor balance. One of our group called it “the comfort-food winner.”

Melon Salad — A gorgeous bowl of mixed melons, chile piquin, mint, frisee, pepitas and cotija mixed  with a lime vinaigrette and topped with granita. Delicious and refreshing, and we bet it will be out of thi s world amazing when melons are in season! We ordered ours without the cheese (cotija), and it made for a dish that was sweet enough to work as a fruit dessert.