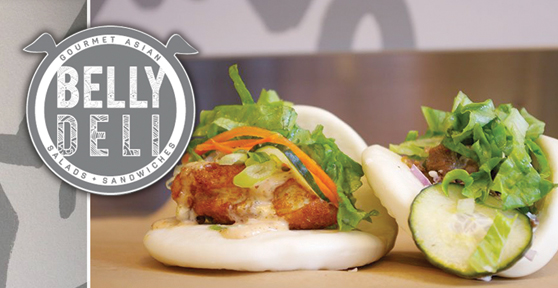 We don’t understand the current trend for alliterative but unappealing restaurant names—Slurping Turtle, Belly Deli—but don’t let it chase you away. Bulgogi subs, kim- chi fried rice balls, salads piled with Szechuan chicken— originally billed as No Thai’s foray into the world of banh mi sandwiches, Belly Deli is a pan-Asian student comfort food joint. This isn’t subtle or especially “authentic” food, but it is tasty and inexpensive, especially considering the portions they deliver.

The interior is minimalist, with lots of brushed stainless steel, graffiti art, and a large shared table surrounded by counter seating. Most of the business seems to be takeout, so you should have no trouble finding a place to sit.

Bokum Balls: Think of these kimchi pork fried rice balls as Korean fusion arancini; you get three of them in an order, with Sriracha ketchup for dipping. The coating is beautifully brown and crispy, and despite the kimchi, the flavor is mild. But they’re addictive.

Freestyle Wrap: Vietnamese-style chicken spring rolls, served with lettuce leaves for wrapping, basil and sweet pickled daikon and carrot. The spring rolls by themselves are nice, but wrapped up in the lettuce leaf with pickles and basil makes for a great flavor combination. The basil in particular really adds a fresh note.

Taro Chips: Uncontent to pair their sandwiches with mundane potato chips, Belly Deli thin-slices and fries their own taro chips. These are excellent, lightly salted with a perfect crunch.

Bulgogi Beef Sammy: This sandwich pairs a generous portion of their sweet bulgogi beef with Vietnamese pickled carrots and daikon, jalapeños and cucumbers to make one of the must-have sandwiches in Ann Arbor. (That is, if you pay the upcharge to have them add paté to it; this banh mi-inspired touch really takes this sandwich to the next level. If you like heat, spring for extra jalapeños.)

Kimchee Sausage Sammy: A Dearborn red hot with grilled onions, peppers, kimchee and cheese. A lot of the other choices tend to- ward the sweet side, but this doesn’t—it’s a little lighter on the kimchi than we’d prefer, but it’s spicy and robust.

Char Su Pork Sammy: Asian-style BBQ pork (like the pork in a Chinese steamed pork bun), but piled on a crusty sub bun with the aforementioned pickled carrots and daikon, cucumbers, cilantro, and jalapeno. The pork was well flavored, but again this sandwich is on the sweet side, which is only to be expected with Char Su style pork. They say this is the most popular sub, and we can see why, though we generally favored the Bulgogi one.

Szechwan Stir-Fry Salad: The woman who took our order recommended the chicken, and so do we. The chicken was stir-fried with a glossy sweet-spicy sauce and served on a generous mound of lettuce, cabbage, green beans, car- rots, and more. Soy-garlic vinaigrette, which goes well with the greens, is on the side, so you can dress it to your own tastes.

Bulgogi Bun: Belly Deli does a nice job with their bulgogi beef, which is on the dry and crispy side. Pickled cucumbers and onion add contrast along with the sauce.

Pulled Pork Bun: Shredded pork, simple and not overdressed, with good texture. In terms of flavors, this was perhaps the “plainest” of the buns as the pork wasn’t sauced up. Pickled carrots and cucumber provided the main contrast.