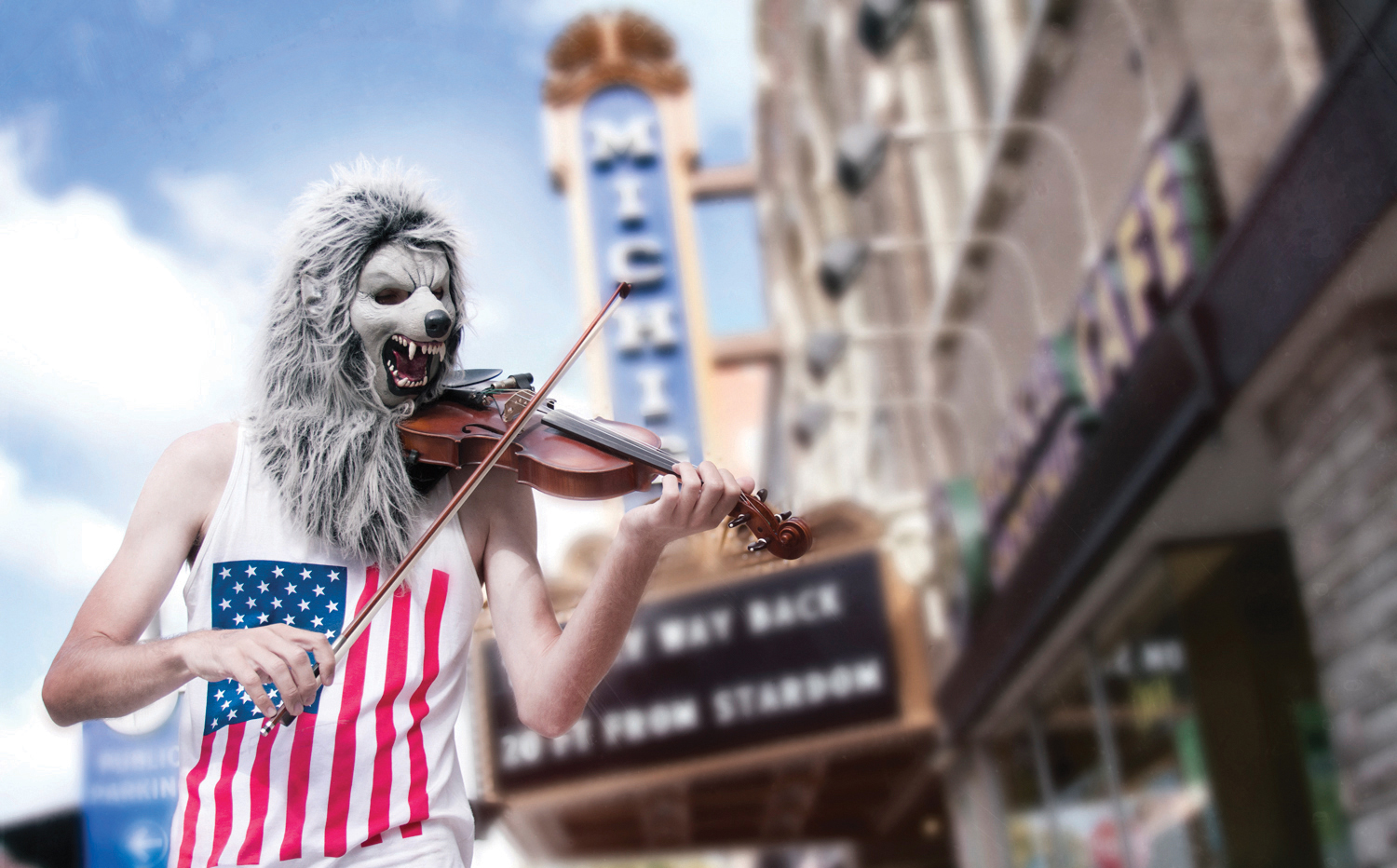 Take a walk through Ann Arbor this summer and you’ll find art. While you might stumble upon public art works funded by the city (Shakespeare in the Arb, the Sonic Lunch series, etc.) some of the key people who contribute to this culture of public art aren’t officially affiliated with the city at all. They are Ann Arbor’s street performers.
He is tall, plays the violin, wears a werewolf mask and never breaks character–leave him a tip and he’ll howl in appreciation. He is The Violin Monster. Usually posted up on Liberty and Main, The Violin Monster has made a full-time living performing publicly for the past three years. He says it’s a good city for street performing because it has a compact downtown area and the residents love art and music. He also says that although street performance is a challenging job, it brings him a sense of freedom. “For me it’s a full time commitment to this lifestyle. It’s not a job that I clock in and out of. I have to constantly think of new ways to expand what I’m doing, and with that comes the ability to get out there and do something I love while making people happy.”

And the crowd is certainly happy. The Violin Monster is always surrounded by passersby. Local businesses enjoy the traffic drawn by Ann Arbor’s street performers, too. Sara Van Zandt and Stephanie Wickham work at Four Directions on Main Street, and they say the performers bring a focal point to the downtown area. Arbor Brewing Company even named one of their seasonal beers in honor of the Violin Monster.

Mark Braun, known on the street as Mr. B, is another longtime Ann Arbor street performer. Playing boogie woogie and blues piano, Braun has been featured on NPR’s Mountain Stage and All Things Considered broadcasts. He took to the streets of A2 25 years ago at the Art Fair and recently started a second act called the Joybox Express, which features a mobile upright piano and stage mounted on a custom-built tricycle. His quartet of cyclist-musicians pedals the stage around, pulling over for impromptu interludes. The money they raise benefits organizations that provide access to children’s arts and athletics programs such as Wild Swan Theater of Ann Arbor and Early Exposure day camps of the City of Detroit Recreation Department.

Braun says that the element of surprise is one of his favorite parts of being a street performer. “When we play on the streets, we’re playing for people who didn’t necessarily come to you in the way they come to traditional venues where they have expectations. In most street scenarios, people are stumbling across you as some peripheral part of their lives: they’re on their way to work, they’re grocery shopping. They’re not purposefully going out to consume music. I’m playing the same music on the street as I play in the great concert auditoriums, and so people are hearing the same thing, but it’s coming at them through a different filter so that it surprises them, and in some cases it can have a more profound effect because they weren’t anticipating it.”

This summer, if you’re in the mood to take in some quality music and art, but don’t feel like being cooped up indoors, consider taking a stroll through the city. Around here, you don’t always have to buy tickets or dress up to find art.