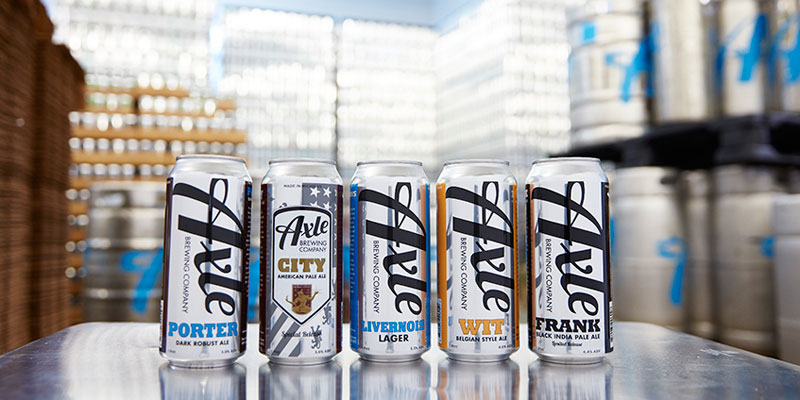 Axle Brewing is a young, ambitious craft brewery located in Royal Oak. Started by a group of friends and a veteran brewer, the Detroit natives have been on a mission to bring great beer to Michiganders since 2015. “Our approach and philosophy has been very simple. Make great beer,” said Daniel Riley, President of Axle Brewing. “Our core beers hue toward traditional styles with a bit of an edge and our seasonal and specialties will push convention.”

Axle is currently brewing six styles; IPA, Red, Porter, Wit, Frank, City American Pale Ale and Ruby. Last week was the start of Axle’s expansion into Washtenaw County. For the time being, you can get the IPA, Red and Wit at select Ann Arbor and Ypsi bars and stores (check out the list below). “This county represents a wealth of passionate craft beer drinkers and is a culinary treasure trove,” said Daniel.  “We are excited to see our beers in some of our favorite places!”

The brewery self-describes its approach as “an eye toward innovation,” which is evident in their product: sleek metallic cans brandishing simple design and strong, straightforward titles that immediately convey the personality of the beer. Their recent collaboration with soccer club Detroit City FC, City American Pale Ale, represents their mission to create authentic and inventive local products.  The brand resonates with the hip look of Detroit’s fledgling renaissance.

Axle Brewing is looking to expand further, taking their beers to Grand Rapids and Kalamazoo this summer. They are also opening Livernois Tap & Brewery, a public taproom and beer garden just north of 8 Mile on Livernois in southwest Ferndale this fall. The space will be a modern take on an Eastern European style beer hall with a large outdoor beer garden.

Head out to one of these locations to get your hands on some of the first Axle beers in Washtenaw County: