An Interview with poet Megan Levad 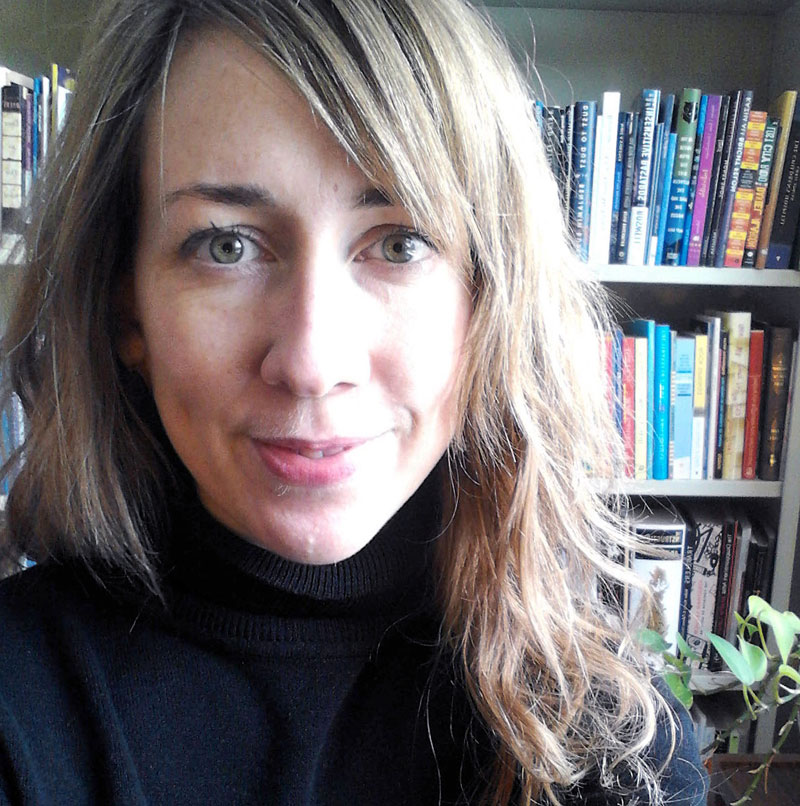 The poet Megan Levad is sitting on my couch. She’s telling me how a friend’s paraphrase of a science podcast became one of the principal voices of her book Why We Live in the Dark Ages, out on Tavern Books, March 2015.

“Even though on paper the way he was telling the story made no sense, I understood what he was saying. It’s more human to get the facts wrong and tell a better story,” Megan says. “Emotional truth is reason, not the actual truth.”

The poems of Why We Live in the Dark Ages are written in a raw, spoken language, witty, flirtatious, often shaped as logical proofs, each “you know” and “oh” and “ugh” seemingly transcribed. The tonal effect is meticulous, inquisitive, warm-blooded, and assertive. And there are other voices here, too, each one searchingly describing curious phenomena, such as homeopathy, fur, Autotune, and “Great Men of Science,” who, are often neither men nor scientists, but figures like Anne Sexton and Koko the Gorilla.

“I was trying to get across the way language actually works.  We’re in a place where we don’t have to have any human intelligence behind anything. So in Dark Ages there’s this voice that’s really trying to sort everything out,” the poet says.

Certain details are mystified, amplified, given a godly aura. In the poem “War,” Levad writes: “And there are a bunch of feet sort of too and those are under the spears and like, it’s like they’re all the heads with the eyes.”

Language seems the key here–to knowledge, to discovery, to the dissemination of information, and to our utter, collective confusion. Levad explains, “This is the way people talk when they’re not answering questions. A lot more curiosity and a lot less finality.”

How does something work? Dark Ages speakers use language to pull apart apparently ineffable human advances. “Autotune” for example: in the poem’s final line, Levad supplies a silent truth that’s been staring down at me for years: “Britney Spears is always trying to prove to us that she is not a robot.” In my living room, Megan Levad says, “Poetry announces: I noticed something.”

A few nights later, at Old Town, a local haunt for literarians, I ask Levad about the title of her book. She responds rapidly, with her typical rigor and zest: “Why do we live in the dark ages? This is what my book is about, right?

“If we were to look at our own time as we look at the past, we might find that we are not the post-Enlightenment, empirical people we think we are. That we know most of what we know not through experience or evidence, but because someone told us. Now, that someone may be an expert in science or technology or history or culture, and not a priest or a king, but we still get our information from them through language. Very simplified language, actually…most of us don’t speak the language of our time any more than Medieval peasants spoke Latin.”

Our drinks, well Manhattans, arrive, and we clink glasses.

“What if we were more interested in how we get facts than in getting the facts right? What if knowledge transmission is more about the connection than about the information?”

Megan Levad is the author of Why We Live in the Dark Ages, the first selection in Tavern Books’ Wrolstad Contemporary Poetry Series. Her poems have appeared in Tin House, Granta Online, Fence, Denver Quarterly, Mantis, the Everyman’s Library anthology Killer Verse, and London art and fashion magazine AnOther. She also writes lyrics for composers Tucker Fuller and Kristin Kuster; she and Kristin will record an opera in 2015, thanks to a grant from OPERA America. A native of rural Iowa, Megan has lived in New York, Chicago, and now Ann Arbor, where she is the Assistant Director of the Helen Zell Writers’ Program at the University of Michigan.