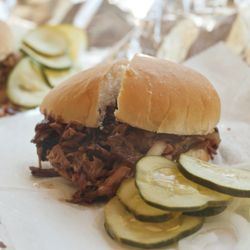 Mario Batali almnus Walt Hansen and his designer partner Hannah Cheadle had some initial zoning difficulties when they decided to move back to Michigan and open their artisan meats shop in Ann Arbor, but they managed to persevere, and they're keen to leave those days behind them and do what they do best — smoking and curing meats.

Because Biercamp is primarily in the business of selling cured meats, sausages, and jerky, their menu is small — but it punches well above its weight, with one of the best pulled pork variants in Ann Arbor. The shop itself has a very distinct personality, sort of Upper Peninsula cabin with some quirky touches, like the stuffed rooster (labeled "Little Walt;" we haven't asked) or the photo of the Fawlty Towers cast quietly slipped in with the framed family photos (they're fans). Seating is limited to a few counter seats in the cold months, but when it's nice out, there are picnic tables too. They also do takeout, wrapping the buns (made in Detroit) separately from the meats so they don't sog. And on home game Saturdays, they fire up the grill and sell their brats and hot dogs to hungry football fans and anyone else who braves the traffic.

We've reviewed the prepared sandwiches below, and we've also written up a sampling of the other meats. We've barely scratched the surface, though, so go in, have a look at the cases, and ask for tastes.


Sandwiches
The pulled pork, the brisket (except Mondays), and one or more types of hot dog or bratwurst are always available hot and ready to go until they run out; the steamship round is primarily on Fridays. If you want to know what they're serving on a given day, friend their page on Facebook where they announce it.

16 Hour Pulled pork – beautifully smoked, with a full savory pork flavor and that melt-in-your-mouth texture that comes from letting the fat cap melt during the long cooking process. You know, the way proper pulled pork should be.

12 Hour Smoked Beef Brisket – equally tender to the pulled pork, with charred bits at the ends, and deeply satisfying for beef lovers. Again, sandwiches are dressed with just a bit of sauce to complement, not hide, the beef.

Steamship round – thick slices of flavorful roast beef, with a homemade horseradish sauce. If you've never had a real roast beef sandwich before, you're in for a very pleasant surprise.

Habañero hotdog – this dog should please those looking for something spicy hot to light up their tastebuds. We thought the habanero in our dog was well balanced with the meat, but heat does grow with each bite.

Bacon
Biercamp not only does traditional bacon, but also some less common variants, as well as applying traditional bacon techniques to other meats — tasty and worth trying even if you do eat pork, but even more exciting for those who don't.

Applewood smoked bacon – pork, and capable of handily knocking its more famous competition out of the ring.

Peameal Bacon – Q: what do they call Canadian Bacon in Canada?  It's a trick question, because the most Canadian of all bacons is something we actually don't see here very much: "peameal bacon."  It's cured pork loin coated in fine cornmeal. Biercamp's rendition is fabulous.

Herbes de provence lamb bacon –  you'd be hard pressed to tell by appearance alone that this is not pork bacon. Thinly sliced and nicely marbled, it cooks up just like "regular" bacon. The herb de provence seasoning complements the lamb.

Duck bacon – Biercamp does multiple types of  "duck bacon" made from cured duck breast with the fat attached. Our favorite is probably the tasso duck bacon, which is spicy but not overwhelming, and can be eaten as is in thin slices.

Sausage
Because Hansen and Cheadle do a lot of experimentation and are constantly adding new items, it's impossible for us to do more than touch on a few of the myriad of sausages.  Some are precooked and ready to eat; others are raw and require cooking.  Have a look in the case and the freezer, and feel free to ask questions.

Olive Loaf – growing up, luncheon meats like olive loaf and pimento loaf were kind of scary.  This, however, combines actually good pork with good olives to produce something that explains why people would put meat and olives together in a sausage in the first place.

Sriracha Lamb Sausage – strongly flavored, this sausage might be too much for some people by itself.  We're thinking of trying it cut up and mixed with white rice, and topped with a fried egg and a few more lashes of Sriracha.  Walt recommends putting it on pizza, which also makes sense.

Balaton Cherry Bratwurst – one of our favorite sausages, this combines a bratwurst base with dried Michigan cherries, for a result that's unusual and a bit on the sweet side.

Hopwurst – the hops really stand out, giving this wurst a slightly bitter flavor which pairs brilliantly with mustard (and presumably beer, though we haven't tried that yet). Though Lisa isn't a beer drinker, she enjoyed this wurst quite a bit.

Hillbilly Breakfast Sausage – available in patties or links, this is what you expect it to be, but tastier with sage, black pepper, and chili flakes.  They do several more breakfast variants; the one with the blueberries doesn't do it for us (it may for you), but the version with an apple cider reduction is the best breakfast sausage we've ever tasted.

Jerkies and Meat Sticks
Biercamp offers a range of jerkies (beef, pork, chicken) — all made from thick slices of good-quality meat, marinated in different sauces. It's hard to know what will be available on a given day, since they rotate and experiment with things, but the standard beef jerky, the Lizano salsa ones, and all of the Asian-inspired ones are especially good. A word of warning here; Walt has an unusual heat tolerance, so when he says something is hot (e.g. the "Quattro Crazy" jerky, made with four hot sauces), don't ignore the warning.

Traumatized by childhood Slim Jim experiences, many food enthusiasts disdain the humble meat stick. That would be a mistake here. Biercamp's, a mixtture of beef and pork, are tasty.  They're excellent snacks on trips, or just at home. Joe's personal favorite is the Barbecue (the fruity sweetness cuts the salt), but they're all good, and the Habañero is respectably hot. (He sometimes gets a bag of mixed Barbecue and Habañero as a Russian roulette kind of thing.) 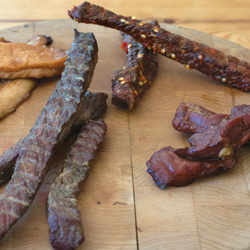