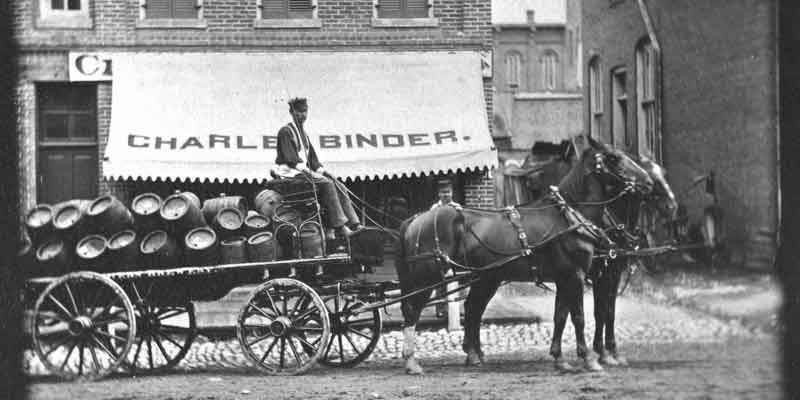 No pictures are known to exist of Charles Binder. Yet, you can just picture him leaning against the pine bar top that stretches nearly half the length of the building at 112 W. Liberty St, dispassionately browsing through advertisements in the now-defunct Ann Arbor Argus—Hangsterfer’s French hand-made bonbons, Clark’s Mile-End Spool Cotton, and Eisenbarth Liver Pills meant to “stimulate a sluggish system.”

“Ann Arbor in the late 19th Century was divided along Division Street,” says Professor Francis Blouin of the University of Michigan. “To the west it was a small industrial town with a population largely of German descent.”

Picture further: Outside the front windows, a delivery man rests atop a four-wheeled cart parked on still-muddy Liberty Street, stacked high with oak beer barrels ready for delivery. Later, Charles recounts in a slight German accent to his wife, Agnes, that he had been swindled, that the price of beer had gone up significantly in the past year and that he’d have to raise prices himself. And that it made him sick to do so.

In its current iteration the space is now Alley Bar, still dark and moody, a nearly building-length room full of hoary, sunken booths—themselves relics from The Flame’s original location on Washington, gutted and hacksawed to fit in their current resting place. It’s been called by many names (Bab’s, The Flame, The Round Table, Kitty O’Shea’s), but has always existed as a bar or bar/restaurant combo since 1880 (except during prohibition, of course).

Though there were those in Ann Arbor who shunned drinking as the devil’s work, saloon and bar culture in the late 19th Century was vitally important to the local economy—which explains why German-cum-American entrepreneur Charles Binder chose this location to build his historic saloon.

“With the influx of immigrants into the nation from places where alcohol was really fundamental to local culture,” Professor Blouin explains, “drinking was more common.” And the idea of the place is much the same as it has always been: it’s a gathering spot for local folks who want a drink, want to converse and rouse rabble.

Only a single photo of Binder’s Saloon exists—taken circa 1890 by C. Howard Ross—which shows the before-mentioned beer wagon stationed in front of the saloon, the black awning stenciled with Binder’s name in white. Alley Bar has an awning, too, a deep-crimson one with no name written on it, as well as a glaring neon “open” sign positioned in the darkly-tinted front windows that cause passers-by to stop, peek inside, and see what’s going on.

Robbie Schulz, owner, says, “Our idea is to create a space where a construction worker or lawyer, a book club or whoever can come in here and feel welcome. There need to be places around where people feel comfortable.”

It holds as true now as it did then

History, of course, doesn’t involve only life-changing events—just the simple act of existing is historic enough, and buildings are often overlooked portals into that history, personal connections to something of the past. Binder’s Saloon paired well with the sudden appearance of unskilled factory jobs; the drinking, the meeting at these saloons helped, as Professor Blouin says, “to relieve the monotony of the workday,” much as it does today.

Robbie Schulz recalls, “I used to open up and get some of the older townies, people that used to live here, peeking in.  They’d say ‘I used to hang out here in the Sixties!’”

I don’t know what Charles Binder looked like or if he read the Ann Arbor Argus or if he complained about beer prices to his wife. But the building is still here, and the ghosts of Binder and that beer barrel delivery man and C. Howard Ross and all the patrons still roam this long narrow bar. Even now, today, 134 years on, you can sit here, in this living tableau vivant with the exposed original brickwork in shades of russet and rust and chestnut and copper—this reminder of who we were and, more rapturously, who we are today—and disappear completely.