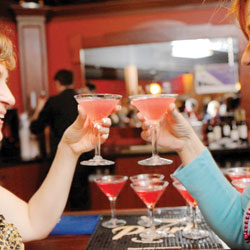 The artistic side of martini-mixing comes out at  the 5th annual Artini, a “bar crawl” style fundraiser for the Ann Arbor Art Center. From 7 to 10 pm  on Saturday, February 22, Art Center supporters can sip on specially made 3 oz ‘artinis’ at ten “Artini Artist” locations in downtown Ann Arbor, including Café Habana, The Ravens Club, and Vinology. Artini tasters vote for the best artini via text message between 7:30pm and 10:30pm. Artini fundraiser tickets have sold out every year since the fundraiser began. This year the fundraiser is organized by Kate Jones, the Center’s Special Events Director.  Artinis, made specially for the fundraiser, are not regular menu items, though award winners are usually offered after the competition. In 2012 The Black Pearl won with a blood orange artini, adding to their previous win in 2010 for a candy apple artini.