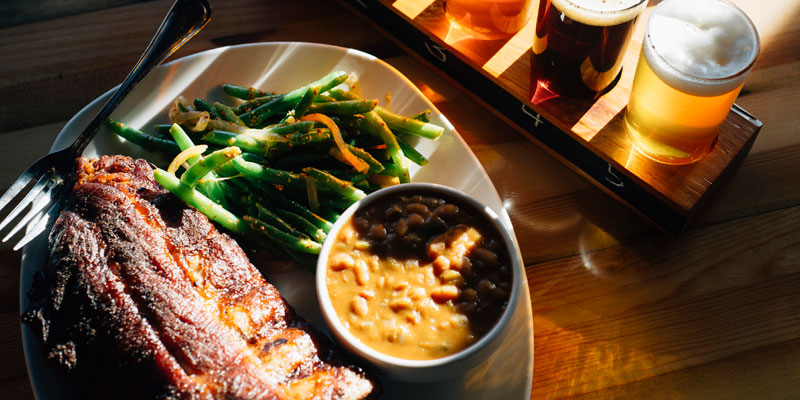 The University Of Michigan’s Ross School of Business hosts a monthly dinner featuring a chef from a Detroit restaurant. This exclusive event is known as Taste of Detroit. The dinner is held at the Executive Dining Room in the Ross School of Business, and for around $60 you can get yourself an intimate night of hand picked dishes ranging from appetizers to desserts, all prepared by one of Detroit’s finest. Oh yeah, and lest I forget to mention the open bar, which features a small selection of drinks that were hand picked to pair beautifully with the food menu.

This month the Ross School of Business invited Drew Sayes, the corporate executive chef for Slows Barbq. Drew gave a short speech before dinner, during which he expressed much gratitude for the invitation, stating that Chef Brian Perrone and Philip Cooley, the founders and current owners of Slows Barbq were, “excited to be offered the opportunity to showcase a part of Slows menu in Ann Arbor, and that the ability to reach people in new and different areas is very important to Slows.” After sampling the menu that Chef Sayes prepared I would say that Slows has achieved their goal. Chef Sayes selected a number of staple menu items, that are currently being featured at all of their locations, as well as a few new items that are not featured on the Slows restaurant menu, but available for catering events.

Upon being seated in the lovely executive dining room, at a table set perfectly for two, I was offered the Pimento Cheese Toast, one of the aforementioned items that is only available for catering events. The pimento cheese toast is a light and fluffy blend of cheddar cheeses mixed with mayonnaise and cayenne pepper atop a tender triangle of toast, and that is all I can say to save from giving away the recipe. The sweet hot flavor nestled in with the cool creamy cheese mixture will left me longing for more.

The menu also featured prime dry aged beef ribs, which are new to the Slows menu. The beef ribs are hickory smoked and bursting with a savory juicy flavor and pair well with any one of Slows signature sauces. The menu featured some staples like pulled pork, chicken wings, collard greens, pit beans and slaw (the slaw is damn good and loaded with flavor, and features a bit of spice).

Two items on the menu really stood out — the famous mac and cheese, with its gooey hot melted cheese mixture and shell noodles that hold flavor like tiny carbohydrate sponges, this Mac and Cheese is the Alpha and Omega of mac and cheese! Forget sugarplums, I want this gooey cheesy goodness dancing in my dreams. The second standout item was the dessert, which was a maple budino. Budino is a sweet Italian dish, rich and creamy like custard or pudding. The Budino was served in a small mason jar atop a chocolate cookie crumble and topped with a delicate whipped cream. The combination of textures between the cookie crumble, the maple budino, and the whipped cream were a delight to the taste buds, the kind of dessert that makes you savor every morsel, and a perfect ending to any meal.

For more information about the Taste of Detroit Dining Series, visit bus.umich.edu or call 734-763-3621.