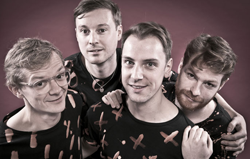 The Ann Arbor Summer Festival heats up the Mainstage with the exciting art-pop band from Scotland, Django Django. Think the pop sensibilities of a Beach Boys for millennials—with psychedelic harmonies and killer surf-rock riffs. They're gearing up for a number of festies this summer coming off their critically acclaimed 2012 self-titled debut album.