Too macho, or not too macho? 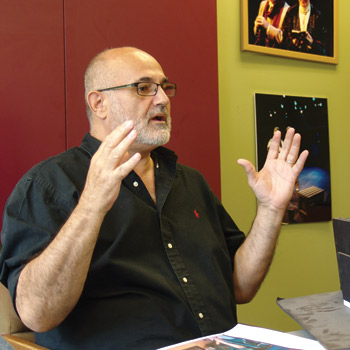 The Purple Rose Theatre opens it’s 2013 -2014 season with a reprise of Jeff Daniel’s The Vast Difference, a comedy the theatre last presented twenty years ago. The play, veering between high hilarity and sweet poignancy, is about George Noonan, a 30-ish flight attendant and father of five young daughters, whose wife has decided it’s time for him to get a vasectomy.

recently talked to us about the play.

Sanville: I originated the role of Earl (George’s father’s ghost) when we did it twenty years ago. I won’t be playing it this time, I will be directing it. It’s just a beautiful play. It’s got a lot of heart, it’s very funny, it’s got Al Kaline and the Tigers… we’re taking a very nostalgic, epic, timeless approach.

Has Jeff Daniels made any changes?

No. He’s willing to, and he may update a couple things, but no, it’s as timely as ever.

So it’s not going to be Cabrera instead of Kaline. (Laughter)

No, oh no. Al Kaline stands for…

A lot more than baseball greatness.

Right. We’re also not going to put Chuck Norris in there instead of John Wayne. (Another iconic figure referenced in The Vast Difference.) In the play, Al Kaline represents so many things, the grace, the dignity, the restraint, the style, the passion. When we did it here the first time, Al Kaline actually came to see it with Ernie Harwell and Jim Price. Al Kaline was the way you’d expect him to be; he was a gentleman, he was very generous. He’s a quiet guy, not one of these bang-your-chest guys. When he said, “All the personal glory doesn’t mean anything if we don’t win the game,” he meant it. This is a guy who tried to give a raise back, because he didn’t feel he deserved it. What the hell is that? (Laughter)

Things are  different now, that’s for sure.

The players union wouldn’t let him do it, and I’m glad about that, but talk about integrity.

We’re taught to choke down emotions and be stoic. John Wayne made a hundred and fifty movies, he never cried in one of them. Clark Gable did once… What does it mean to be a man? I made some notes the other day. (Sanville reads from his notebook.) Nostalgia is a very key word here; in ancient Greek it literally meant a pain from an old wound, a twinge in your heart, far more powerful than memory alone. George is coming to terms with the death of his father, the ghost who keeps showing up. When we did this play twenty years ago, I had so many people come up to me after shows, usually guys, usually somebody who’d lost his father, and say that they were very touched and very moved by it. It’s also going to be extremely funny and silly, as all people can be.