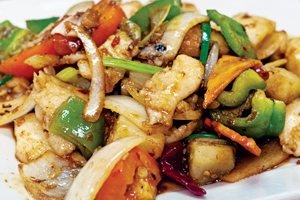 “Chinese people usually eat the head,” our server told us, bemused that we’d taken so much effort to pick all the meat off our small fried pieces of fish, but left the tasty heads intact. At first glance, Happy Wok looks like just one of the ubiquitous, mostly-take out Chinese restaurants with General Tso’s on the menu and a few booths and tables for eating in.  However, Happy Wok has something few of those other places have: in addition to the standards, they have a Malaysian and Singaporean menu, which is the focus of this review.

Roti Canai: this Indian-influenced dish, found in both Malaysia and Indonesia, is named after the delicate, flaky flatbread called Roti. The roti are served with a soupy mild yellow curry including bits of chicken breast and tomato.Tear off bits of the bread and mop up the delicious sauce. This one’s best when warm, when the bread pulls apart with a nice resistance; it gets a bit soggy when done as take out or delivery (though we still order it because sometimes we’ve just gotta have it). 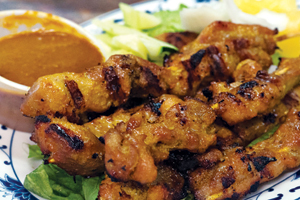 These are often eaten as a stand-alone meal for one; they aren’t necessarily designed as a first course for a larger meal.

Laksa Noodle with Shrimp: this creamy, coconut milk-based red curry noodle soup is lightly flavored with a bit of chili and loaded with shrimp, fake crab, and bites of fried tofu.   It’s perhaps Lisa's favorite, and she's not alone as Happy Wok can run out of it.  (Great for delivery.)

Herb Soup (Bat Kut Teh): meaty pork ribs, cooked in a clear broth with Chinese herbs including long strips of Solomon’s Seal. A simple dish, and one which we think is intended to be eaten like chicken soup – good for what ails you.

As with the soups, these are often eaten as a stand-alone meal.

Cha Kway Teow: literally "stir-fried rice cake strips," this traditional street food dish was one of our consensus favorite dishes of the night. Shrimp, bean sprouts, pork, egg, all over flat rice noodles in a soy-based sauce; the dish was deep, with multi-layered flavors. Our server told us to eat it first because it was best hot, and she was right.  You can get this delivered (and Joe has) but if you get it fresh, it’s ambrosial.
Shrimp Mee Goreng:  these stir-fried spicy noodles are similar to Chinese chow mein dishes, but with a Malay touch – beautifully done shrimp, great flavors of tomato and soy, a nice touch of heat that wasn't too overwhelming. A nicely balanced dish.

Wonton Mee: Chinese Malaysian dish of noodles cooked in a sweet soy broth and served with a bit of Chinese BBQ pork, accompanied by delightful pork wontons (with nice thin wrappers and a delicious filling) and young bok choy.  (Excellent delivery dish; comes with chicken broth to dip the wontons in.  Can be lunch by itself.)

Malaysian Spicy Shrimp Fried Rice: well-executed fried rice, not heavy, with shrimp, eggs and a sweet-spicy flavor.  The heat adds interest; this is a good accompaniment to many of the main dishes below.  (Good delivery dish.)

Ikan Pang Gang:  If you want to stretch your culinary horizons, you can try these grilled little fish served whole on the bone, with accompanying chili paste. The head, as mentioned above, is considered a delicacy.

Sambal Fish: Tender slices of delicately-flavored fish and vegetables perfectly stir-fried in a sambal-based sauce that has a nice kick.  (Sambal is a chili-based sauce found across southern Asia from Sri Lanka to the Phillipines.) We wouldn’t go there and order just this, but as part of a meal, it’s wonderful.

Hainanese Chicken:  A traditional regional dish and street-stall favorite, it looks deceptively simple but packs a lot of flavor. Boiled in stock and chopped into moist, bone-in chunks, it’s served with a dark soy-sugar-sesame sauce that you'll want to slosh over the accompanying rice that has been cooked in more chicken broth. Allow 30 minutes.

Sweet & Sour Fish:  Crispy, deep-fried, and not as sweet as the Americanized version you’re probably thinking of. As with the Sambal fish, it’s a bit ‘one-note’ if it’s the only thing you’re ordering, but it’s a great item to include in dinner where you’re sharing dishes around.

Beef Rendang: the Malaysian interpretation of this famous Indonesian dish, falling-apart beef chunks in a coconut milk-based curry sauce, cooked down to dark perfection. Happy Wok's was saucier (with a thick gravy-like sauce) than you’ll see at Indonesian restaurants. A group favorite.

Belacan Green Bean: belacan (pronounced “blachan”) is Malay for shrimp paste. The beans were cooked nicely, to a perfect balance of soft and crunchy. This was one of the spicier dishes tried.
Happy Wok is a small restaurant with limited seating, so if you’re going to descend on them with a group larger than four (as we did), we strongly recommend that you call ahead. But they’re worth
the trip!

Lisa and Joe have been blogging about food in the
Ann Arbor area (and points beyond) since 2004.
Check them out at www.kitchenchick.com