Return of Black Jake and the Carnies 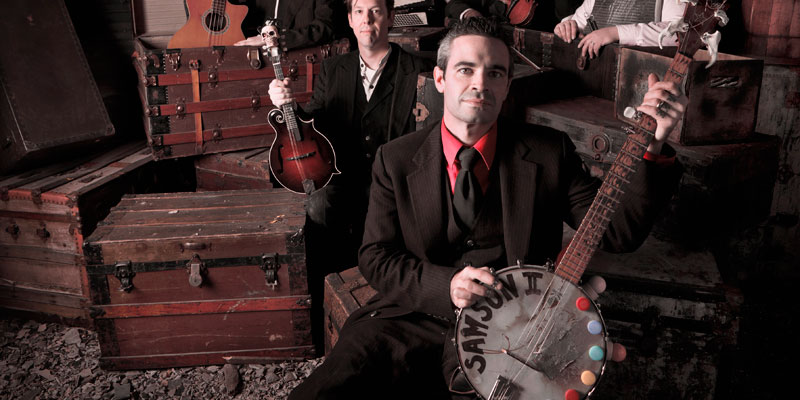 There's a sinister but genuine grin that creeps into Black Jake's otherwise aristocratic face when he realizes mid-song the mayhem he's inducing. His bandmates relish it, wildly hoeing down, but it is obvious that the atmosphere of sideshow insanity is at his command. It’s not bluegrass and it’s not punk rock. The hardy endurance and the like-it-or-not undeniability of the group is rampant. But much as mp3 genre metadata may nag to the contrary, this kind of music doesn’t really need a name other than Black Jake and the Carnies.

Despite the tumult of rowdiness they inspire, The Carnies haven’t had a show or released a song since 2014. Their blog left off somewhat unceremoniously with their Poopslider track about everyone’s favorite Ypsilanti playground defiler, a hot topic in the news around then. Since that time, Jake has been fighting the misery of an inspiration rut and a general feeling from his band that they were, as he said when we reached him for comment, “pretty much all done anyway,” and pursuing an elaborate one man band effort, fraught with devilish imagery and titled Black Jake’s Revenge.

Now, acting on his longtime desire to include a clarinet player, as well as bringing to life the guitar parts that he recorded himself, he has reformed the ensemble and he and his light-up banjo will return backed by a completely new lineup. Announcing the news with controlled enthusiasm in a statement, he declared, “not only do they not stink up the place, but I like it better than ever!”

Putting to use the pneumatic rig he invented for his solo act, he’s got a kick drum and tambourine that he’s working himself now. The new band’s monikers delightfully cover the bases of both defiant first name recognition and creatively invented aliases. There’s guitarist and guitar-maker KK Dirty Money, Big Lip on clarinet and saxophone, Ozzie on the low end, providing, “good but slightly unusual bass,” and percussionist Wally, who looks like Colonel Sanders had a wild party monster for a brother, bringing the, “manic cartoony flavor” (according to Blake Jake) to round it out. Black Jake, of course, will remain the frontman and captain of this cadre of talent. It is he who oversees the madness.

“It was a huge risk to change it up so much, but pulling off the impossible is half the fun of being creative,” said Black Jake. “All my songs' words and melodies provide a stable skeleton for everybody to flesh out with their own unique voices, and I prune it here and there as inspiration leads. But you'll recognize it; you'll sing and dance along. You'll chuck plastic balls at me and the new guys!”

You can witness him and the new guys for yourself at the Club Above in the Heidelberg on April 23. He dares you.