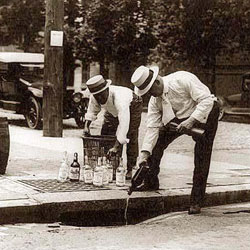 When alcohol was outlawed following the 18th amendment, it gave an immediate rise to the underworld of crime and lawless acts of violence. One of the most noteworthy: the 1929 St. Valentine’s Day massacre of seven of Bugs Moran's men by Al Capone's gangsters to gain control of Chicago's illegal liquor trade. During those uneasy times of Prohibition, the vibrant cocktail culture in the U.S. suffered a tremendous blow. This led to a mass exodus of talent "across the pond" to cities like London and Paris where, along with many of America's top barmen, it flourished.

In the spirit of Valentine’s past, I invite you to leave the champagne and strawberries on the shelf this year and opt for a couple of classics from the Prohibition Era that are sure to delight your significant other. The Royal Romance Cocktail (winner of the 1934 British Empire Cocktail competition) was created by John Perosino of the May Fair Bar in London. The drink is named in honor of the engagement between young Prince George of England and Princess Marina of Greece that captivated the country at the time. The more flirtatiously titled Between The Sheets,  which popped up on menus all over Europe in the early 1930's, is credited to Harry MacElhone of Harry's New York Bar in Paris. This seductively smooth relative of the Sidecar originally calls for light Rum, but I find aged rum gives the drink a more unique character.

1.5 oz English gin (I like Plymouth) but any good London Dry style will suit

Teaspoon of grenadine (the real stuff made with pomegranate)

Shake with ice and strain into a chilled cocktail glass

Shake with ice and strain into a chilled cocktail glass.  Garnish with an orange peel.