Forged in the Glass City 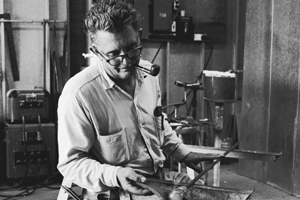 Before 1962, glassworking existed almost exclusively in the hands of scientists, engineers, and manufacturers. Some glass art was created in the 1940s and 1950s, but generally, the only place to find a furnace hot enough to manipulate glass was in a factory setting. The process involved several people working in tandem. The revolution in glass blowing began with a ceramics instructor from the University of Wisconsin-Madison. “Harvey Littleton grew up in Madison, Wisconsin and was the son of Dr. Jesse Littleton, the inventor of Pyrex, which we all know and love,” explains Baker O’Brien, a glass artisan from Grand Rapids, Ohio. “Harvey became a ceramics teacher at the University of Wisconsin, but still had an interest in glass.  He had this idea that if a potter could have a kiln in his backyard, then why not (allow a glassblower to have) a glass furnance?”

Littleton began teaching ceramics courses at the Toledo Museum of Art in the 1950’s, and in 1962 he approached Otto Wittmann, the museum’s director, about having a glassblowing workshop to experiment with the idea of one person creating glass alone. Such a thing had never been done before, and none of the students knew what would come out of the endeavor. One of those students, Edith Franklin, remembers that first class, which was held in a garage on the museum grounds.  “I was taking pottery classes at the museum at the time, and our teacher was Norman Schulman. Norm told me the museum was going to start teaching glass. ‘Ahh,’ says I, ‘I’d like to take that.’  But no. I was told it was limited to university pottery instructors. But about a week before the class was to start, Norm came up to me and said they couldn’t fill the class. So I paid $50 and joined.”

This year marks the fiftieth anniversary of that experimental workshop which explored creating studio blown glass as a reality. Milestones were reached, friends were made, and, ultimately, a movement was sparked. The Glass City will commemorate the half century since that artistic breakthrough, hosting the 2012 Glass Art Society Conference June 13-16.

Accounts on how many students attended the workshop (there were two sessions, one in March and one in June 1962) vary from six to as many as a dozen, but what is agreed upon is that two men were instrumental in the workshop’s results: Dominick “Nick” Labino and Harvey Leafgreen. The group of instructors and students built a small brick furnace but quickly realized they could not get it hot enough to melt the batch of glass chemicals that Littleton had supplied. “Nick developed glass for Johns-Manville in Waterville, and he suggested they use #475 glass marbles which he had developed to make fiberglass,” tells Baker O’Brien, Labino’s former apprentice. “The glass melted and it was malleable.” All that was missing was technique. Franklin recounts, “That class was the only class I ever took where no one knew anything. They all knew glass, had seen it melted, but no one could get a bubble and keep it. On the last day, Mr. Leafgreen arrived from a lecture at the museum. He was an old man and had been a glassblower at Libbey. That day he came in, gathered up his glass, and blew a bubble. Then he moved his thumb over the pipe, trapping the air inside his bubble. There it was: the first bubble.”

The birth of a movement

Harvey Littleton returned to the University of Wisconsin where he set up the world’s first glass blowing program at the post-secondary level.  “He did a lot for education, and the art really grew in that first ten years,” says O’Brien. The field became a worldwide phenomenon, with the Glass Art Society— an international non-profit now based in Seattle — convening for the first time in 1971. TMA hosted bi-annual glass exhibitions from 1966 to 1972.

O’Brien, who was not present at that first workshop, is an heir to its legacy.  Labino took an early retirement and built one of the first glass blowing workshops. He built that first studio outside of Grand Rapids. During the late 1970s, he took on O’Brien as an apprentice, then a young metalworking artist completing her work-study from Antioch College. Today, operating in Labino’s studio, O’Brien is one of only a few studio glass artisans that works with homemade glass.  “What Nick did is different from what 99.9% of the studios do today.  He mixed color into the batch from scratch.  This was before prefab glass powder; he actually made his own glass.  That’s why his glass, and the glass I make, looks different from all the other glass out there.”

Though some of her pieces from that pioneering workshop are on display in the museum’s Glass Pavilion, Franklin did not pursue glass blowing as a career, choosing instead to continue on as a potter.  She was, however, instrumental in the formation of the Toledo Glass Guild along with Labino and a city worker named Dick Boers. Franklin was very involved in a potter’s guild and knew that many artists wanted to blow glass but could not afford to enroll in a class or to have their own furnace. Franklin and Boers talked to Labino, and he designed a furnace, which is still available for Guild artists, at the Toledo Botanical Gardens.

It has been fifty years since that first workshop, and its accomplishments will be celebrated at the forefront of this year’s conference. “It is a very rare thing to know exactly where and when an art form began,” says TMA’s Curator of Glass and Decorative Arts Jutta-Annette Page. “But in this case, we know exactly where and when studio blown glass started. The idea came together in Toledo. This is the intellectual home and conceptual birthplace for studio glass. That’s why so many people are coming to this year’s conference.”

The 2012 GAS Conference will feature lectures, tours, demonstrations, exhibitions, auctions, and activities for both GAS members and the general public at the Glass Pavillion, SeaGate Convention Centre, and Huntington Center. (For listings, see pull out.).  Highlighting the festivities are a detailed re-creation of the original brick furnace used in the 1962 workshop, a keynote address from the museum’s director Brian Kennedy, a Goblet Grab first-come-first-serve sale to raise funds for the Craft Emergency Relief Fund (a national service whose mission is to sustain the careers of artists) and the long-awaited opening of TMA’s Wolfe Gallery for Contemporary Art on June 14 with the kick-off of the exhibit titled, Color Ignited: Glass 1962-2012.

“The studio glass movement was not a flash in the pan,” says Page. “It spread like wildfire because its early supporters entrenched it in the university system and trained a new generation of artists.  It was like the domino effect.  Glass as a material has evolved from drinking glasses to oven pans to touchscreens in tablets, and artists are actively using these changing mediums. It is an art form that is here to stay.”