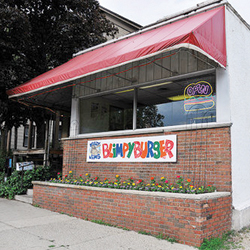 In early December, a veritable bombshell was dropped upon the Ann Arbor community with the news that Krazy Jim’s Blimpy Burger, nationally recognized and locally beloved burger joint, will soon be forced to shut the doors of its iconic 550 S. Division Street location due to a property deal between the The University of Michigan and Patricia Shafer, the property owner and widow of Blimpy’s founder Jim Shafer, who opened the restaurant in 1953.

Sadly, negotiations have occurred outside the sphere of current owner Rich Magner, himself a Blimpy’s affiliate since 1969, who had no plans to close up shop and is currently exploring the possibility of relocating elsewhere in Ann Arbor.

Ann Arbor is the kind of place which engenders uniquely strong ties of loyalty to locally owned private businesses, Blimpy Burger being particularly emblematic of this. The university, its academics and athletics, is obviously the dominant local institution, and the unique cultural climate it fosters provides the foundation upon which Ann Arbor thrives. But to what degree does the university itself owe a debt to the ‘lesser’ institutions — that patchwork of shops, restaurants, cafes, and nightspots — with which it has a symbiotic civic relationship? Does our attachment to such local cultural staples transcend simple nostalgia, and do we have a right ask them to be preserved as such for current and future generations of students and other Ann Arbor residents?

The longstanding, generations-deep cult of “Blimpy addicts” would not exist without the storied quality of the restaurant’s burgers & deep-fried veggies, but those culinary traditions only account for part of the Blimpy’s mystique. With its cast-iron seating fixtures, checkerboard floor-tiling, pale-green formica surfaces, and “assembly line”-style open grill, the restaurant’s interior is an effortless throwback to the greasy-spoon burger joints and soda fountains of the Technicolor era. It is an atmosphere achieved not by any pretense toward retroist design chic, but simply because the place has never changed.

It is precisely the potential for such a change that has upset loyalists and, however noble and practical Magner’s plans to reopen, it has become immediately clear that the Blimpy’s people know and love will not die a quiet death. Indeed, news of its closing has sparked a mounting local controversy. Perhaps most notably, Ann Arbor resident Daniel Lord, 45, has appealed to the masses with a Facebook-based “Save Blimpy Burger” preservation campaign, which, as of press time, has amassed nearly two-thousand supporters.