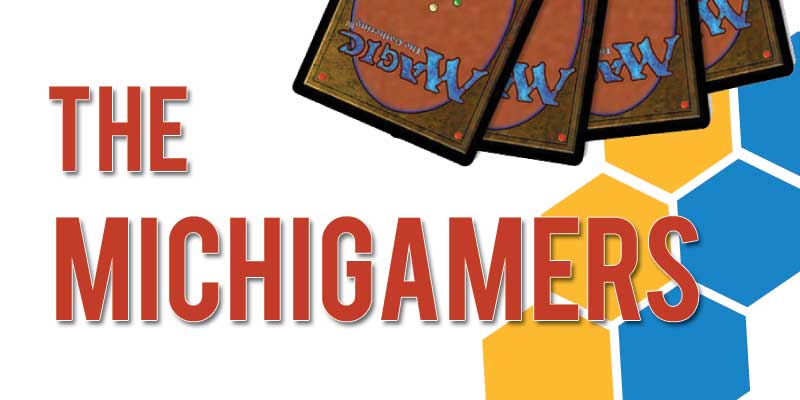 On a cold weekend in mid November, hundreds of people gathered at a hotel in Ypsilanti for a convention centered on a decidedly indoor activity: board games. Players—many of them bearded or wearing shirts that reference geek culture—sat at large tables in grand ballrooms. There, they rolled dice, shuffled cards and moved colorful bits around boards.

While the topic might sound familiar, the titles may not. In three days of all-day play, not a single participant opened a copy of Monopoly, Risk or Sorry. Those games are practically dirty words at U-Con, where games tend to require more strategy than Americans are used to. Players often must plan several turns ahead, and many modern board games rely on very little luck—though that’s not a hard rule. The 2014 title Fun Farm, for example, is built on silliness, chaos and stuffed animals.

“There’s this whole world of hobby games… out there that are unfamiliar to the vast majority of Americans,” said Alex Yeager who works at industry-leader Mayfair Games. “Really, there’s something out there for everyone.”

Decades of progress separates the games played at U-Con from those most Americans are familiar with. Board game design is a technology, just like video game design is a technology. Games like Monopoly are the board game equivalent of Pong—the kind that people play as kids and move on from. But a dedicated subculture has pushed the field forward year after year. As a result, modern board games are more interesting and more fun.

In Dead of Winter, for example, each player takes the role of survivor during the winter of a zombie apocalypse. They have to cooperate to gather supplies, overcome regular crises, and fortify their colony. A player can only win if the colony survives and they complete the group objective as well as their own secret objective. It’s a game about tough choices, both mathematical and moral.

Designer Jonathan Gilmour attended U-Con to help teach people how to play. Dead of Winter will also appear this year on the web series TableTop. The show stars Star Trek alum Wil Wheaton who, each episode, plays a board game with three celebrity guests. It’s like Celebrity Poker for the geek set. The show is now in its third season, and the Season 3 game selection shows a strong bias for titles published in the last two years.

“We’re living in a golden age right now,” said TableTop producer Boyan Radakovich. “Even a mediocre game nowadays would have been a massive smash hit 10 years ago.” 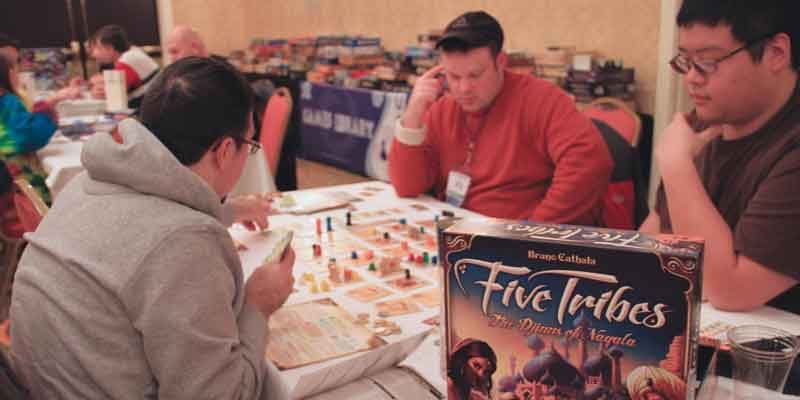 As the state of the art has advanced, the subculture has grown. U-Con was a curiosity when it started as a campus event at the University of Michigan in 1988. In 2011, it moved off campus and drew 528 attendees. In 2014, that number jumped to 741—a 40 percent increase in just two years.

Similar conventions have popped up across the U.S. Hobby games remain a niche activity, but one that increasingly flirts with mainstream acceptance. Yeager, who lives in Ypsilanti, noted that Mayfair Games’ flagship title Settlers of Catan has even appeared on television shows like The Big Bang Theory, The Tomorrow People, and Chicago Fire. The company paid for none of those placements, Yeager said. Writers, actors and directors have let the game appear in front of the camera simply because they love it.

That mainstream acceptance has translated to sharply-increased sales. In 2013, according to website ICv2—a group which collects data on the explosive growth of comics, festivals, and retailer responses—retailers sold roughly $700 million worth of hobby game products. While that number pales in comparison to Hasbro’s $4 billion in annual revenue, the hobby game market roughly doubled in size between 2008 and 2013.

After being relegated to specialty shops for decades, now big-box retailers like Barnes & Noble and Target are stocking more of these niche games.

But, while the entire country is getting involved, Michigan—and particularly Washtenaw County—is ahead of the curve. Ann Arbor residents have access to some of the richest board gaming resources in the country. Players jonesing to toss some dice or backstab their friends can visit plentiful conventions, gatherings and game stores. Vault of Midnight on Main Street hosts open gaming sessions—with a free library of board games—on Thursday nights and Sunday afternoons. State Street’s Get Your Game On hosts card game events several days per week, and Fun 4 All in Ypsilanti hosts a weekly board game meetup every Wednesday.

The area’s gaming culture has become so ingrained that regular participants struggle to remember the time before it started.

“I’ve been gaming since I can remember, and there’s always been gaming stores that I’ve gone to,” said Sara Castle, the event's co-chair for 2014.

But, trace it back far enough, and Michigan’s current nation-leading game culture draws its roots from four things: The University of Michigan, nearby conventions, Euchre and cold winters.

The Polar Vortex may not be a normal occurrence, but Michigan still has some of the coldest weather in the U.S. Combine that with the state’s above average population density (17th, according to 2014 statistics), and Michigan is an ideal breeding ground for indoor group activities.

This likely helped Euchre become the Michigan phenomenon that it is. The game, introduced by German settlers, barely exists outside of the state. It’s both more strategic than many other card games—on par with Bridge—and uses a non-standard deck. Its prevalence may have also primed Michiganders to understand and enjoy more complicated games like those played at U-Con.

The line from Euchre to board games, Yeager said, may bend through Magic: The Gathering. Magic is a collectible card game in which players buy packs of randomized cards and build personalized decks to battle one another. First published in 1993, some players found the game so addictive that they called it “Cardboard Crack.” Teenagers and college students intensely interested in the game play and build Magic decks for as many as 50 or 60 hours each week.

The introduction of Magic: The Gathering coincided with the importation of European game culture. While traditional American board games like Risk and Monopoly focus on destroying other players and eliminating them from the game, European games tend to focus on indirect conflict. In Settlers of Catan, players compete to collect and spend resources to grow their civilizations. The first player to earn 10 points wins, and all players remain in the game until then.

The popularity of Magic and European board games grew hand-in-hand—often supported by the same college clubs, conventions and game groups. But, as Magic players have aged, Yeager said, they’ve gravitated toward
board games.

“The people who got in on that first wave of Magic—and understood how deep a game could be—now have kids.” 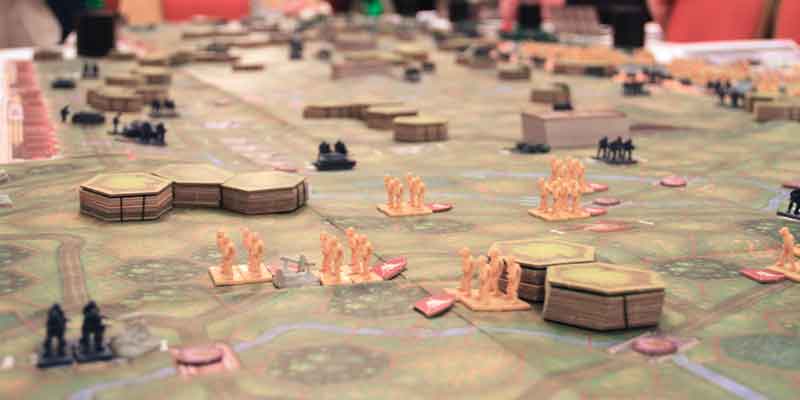 Southeast Michigan, Yeager noted, also has the advantage of being driving distance from two of the biggest gaming conventions in the world. Origins, held at the beginning of each summer in Columbus, Ohio, serves as a gathering point for gamers around the country. Gen Con, held at the end of each summer in Indianapolis, serves as an annual staging ground for publishers to unveil their new titles.

“You could attend the two largest shows in the U.S. for the price of half a tank of gas and as many people as you could cram into a hotel room to make it economical for your typical 18 or 19 year old,” Yeager said.

Ann Arbor’s proximity to those big conventions encouraged local groups to start their own—like U-Con. As those events endured and grew, other events cropped up on unclaimed weekends. Now, the area is saturated with conventions. The U-Con website alone lists 20 other conventions that Michiganders can drive to in four hours or less.

A similar feedback loop has played out for Ann Arbor’s game retailers. According to Nick Yribar manager at Vault of Midnight, the store, which opened in 1996 primarily focused on comic books, had long stocked a handful of games. Around 2006, Alex Yeager convinced the store to try stocking Settlers of Catan. Then, the employees themselves got excited about a game called BattleLore. What started as a sideline for the store has now grown to occupy roughly half of its floor space and account for a quarter of its revenue.

As a side effect of the Ann Arbor area’s concentration of board game culture, the area serves as a home and gathering point for board game creators.

Brian Lewis, who organizes the weekly gathering at Fun4All, designed the 2013 game Titans of Industry and is readying a Kickstarter campaign for his next game, Stab a Panda. The latter title gives players a selection of unpalatable choices—such as stick your hand in a garbage disposal that might turn on—and asks them to rank which they would be most likely to do. Other players score points for correctly guessing the active player’s selections.

Designers sometimes appear at the local game stores to test their new designs, but the area’s designer population is best represented by the annual Protospiel convention, a phenomenon which started in Germany, and which will be held in Chelsea in 2015, where game creators gather in one place to test and refine their prototypes. While groups now host Protospiel events all over the country, the Eastern Michigan Protospiel, which started in 2001 was one of the first to appear outside of Europe.

The first events, said Yeager, drew less than a couple dozen creators. Now, he said, the community has grown to a couple hundred creators “and at a protospiel event you’re going to see 100 different people with 300 different designs.”

A Good Way to Get Through Winter

With the polar vortex threatening to freeze Southeast Michigan for the second year in a row, this might be the season to see what’s going on with Washtenaw County’s board game scene. Local stores can point you to local designs—or simply popular ones.

If nothing else, these games serve as a fantastic way to pass cold nights.

To get involved with board games in Ann Arbor, visit Vault of Midnight on Thursdays at 6pm or Sundays at 12pm, or contact the Ann Arbor Board Game Group on Meetup.com.

Matt M. Casey is a freelance writer and founder of CleverMoveGames.com.