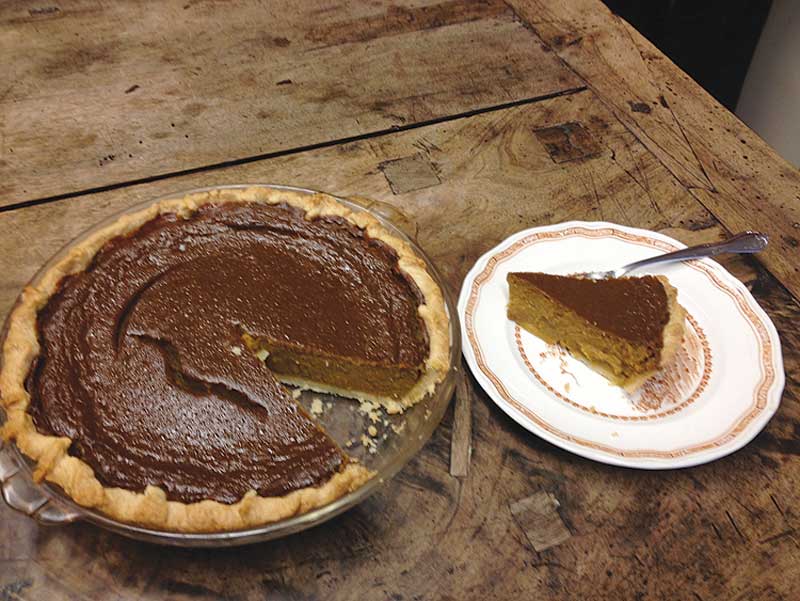 We say “as American as apple pie” but, really, if you want an American pie you need to look to the pumpkin. Apple pie, or at least pie with apples, was eaten in England when “American” meant roughly “somewhere in that newfound territory over there by the West Indies.” Pumpkin pie, we arrived at on our own.

The first genuinely American cookbook, Amelia Simmons's American Cookery of 1796, includes “Pompkin” amongst its pudding recipes and recommends baking it in a crust with milk, eggs, molasses and spice. Sound familiar?

November’s recipe is drawn from a mid-19th century volume titled (in part) Cook and Confectioner: The Complete Cook : Plain and Practical Directions for Cooking and Housekeeping, with Upwards of Seven Hundred Receipts. Mid-19th century recipes look somewhat odd to the modern cook: there’s no list of precisely measured ingredients, and while the author gives the reader instructions of a sort, they strike us a somewhat vague.

This is because cookbook authors a century and a half ago took for granted that if you were reading a recipe, you already had some, and likely a very good, idea how to cook.

Here is the recipe from the book:

“Pumpkin and Squash Pie.—process is pursued in America, and the editor can testify to the immense superiority of the Yankee method. In England, the pumpkin is grown for show rather than for use; nevertheless, when properly dressed, it is a very delicious vegetable, and a universal favourite with our New England neighbours.

The following is the American method of making a pumpkin pie: Take out the seeds, and pare the pumpkin or squash; but in taking out the seeds do not scrape the inside of the pumpkin; the part nearest the seed is the sweetest; then stew the pumpkin and strain it through a sieve or colander. To a quart of milk for a family pie, three eggs are sufficient. Stir in the stewed pumpkin with your milk and beaten-up eggs till it is as thick as you can stir round rapidly and easily. If the pie is wanted richer make it thinner, and add another egg or two; but even one egg to a quart of milk makes " very decent pies." Sweeten with molasses or sugar; add two tea-spoonfuls of salt, two table-spoonfuls of sifted cinnamon, and one of powdered ginger; but allspice may be used, or any other spice that may be preferred. The peel of a lemon grated in gives it a pleasant flavour. The more eggs, says our American authority, the better the pie. Some put one egg to a gill of milk. Bake about an hour in deep plates, or shallow dishes, without an upper crust, in a warm oven.”

There is another method of making this pie, which, we know from experience, produces an excellent dish: “Take out the seeds, and grate the pumpkin till you come to the outside skin. Sweeten the pulp; add a little ground allspice, lemon peel, and lemon juice; in short, flavour it to your taste. Bake without an upper crust.”

After comparing this recipe and several others (it’s the rare 19th or early 20th c American cookbook that doesn’t include a recipe for pumpkin pie), here is my translation into modern terms. It’s flavor is definitely bolder and spicier than most modern pumpkin pies.

3T molasses (I use a mild molasses. If you prefer blackstrap, more power to you)

2t cinnamon (I like Vietnamese cassia, but any cinnamon or cassia will work)

Whisk all ingredients (except the crust!) together until uniform. Pour into crust and bake at 425° for 15 minutes, then reduce the heat to 350° and bake another 30 to 40 minutes until the filling sets around the edges. A knife inserted 1” from the edge should come out moist but clean. Shield the crust with aluminum foil or a pie shield if it begins to get too brown.

JJ Jacobson is Outreach Librarian and Curator, American Culinary History Collection, at the Special Collections Library of the University of Michigan Library, where she works with the Janice Bluestein Longone Culinary Archive.