You know you’ve found a good place when two of your group return to it the next evening. Thai-Thai is that kind of place. By the time we had finished, all of us were making plans for our next trip.

Located in an unassuming little strip mall on Washtenaw, Thai-Thai would be easy to miss. They’ve created a little oasis. Tall plants give some privacy for the pair of outdoor tables, and the interior is a clean contemporary design of earthy browns and brick red. It’s open and airy, so it doesn’t feel as small as it really is. But it is tiny, so be prepared to get cozy with your neighbors. We squeezed in a group of eight, which was quite an accomplishment. (By the time we were done, people were lined up along the wall hungrily eyeing our table).

Traditionally, Thai food was eaten with the right hand, but these days forks and spoons are commonly used. (While Thais do use chopsticks, they’re primarily used for eating noodle soups.) Fish sauce (nam pla) and Thai chili pastes (nam phrik), along with herbs and aromatic spices, form some of the core flavor components of Thai cuisine, all used in proportion to achieve a balance of flavors between hot, sour, sweet, salty and even bitter.

Thai-Thai’s service is friendly, polite and professional. The kitchen was efficient, as our sizeable order arrived quickly, with dish after dish coming to the table in a smooth progression. And, on top of it all, the food was delicious. Particularly striking was the obvious care with which all our dishes were prepared. Ingredients were precisely chopped or sliced to a just-right size for eating with a consistency that spoke of both skill and care. Aromatic herbs and fresh Thai chilies lent a freshness and liveliness to the flavors that really stood out. In fact, fresh, lively, bright, well-balanced flavors pretty much describes our dinner.

The Yum Nua (beef salad) featured thinly sliced, slightly crispy marinated and grilled beef over a mix of romaine lettuce, tomatoes, red onion and chilies tossed with a light sweet-tart dressing – not as full-out tart as this dish often is elsewhere. The romaine was chopped into bite-friendly pieces, and everything was fresh.

Thai-Thai’s Chicken Satay (marinated in coconut milk and grilled on skewers) wasn’t unusual in any way, but it was well-executed. Served with toast points, cucumber salad and an outstanding peanut sauce for dipping.

The Tod Mun (fried fish cakes) were smaller, but superb with a tasty zing. Served with a sweet and sour dipping sauce with crushed peanuts that complement the cakes.

The Scallion “Pancakes” are similar to a fried Chinese-style rice dumpling, with a glutinous dough stuffed with a good portion of chopped scallions. They are a bit oily, but tasty.

Many of the entrées can be ordered with your choice of chicken, beef, pork, tofu or shrimp; though prices vary.

Thin flat rice noodles stir-fried in a garlicky sauce that has a touch of sweetness with a mix of bell pepper, tomato, and onion. The fried tofu was perfectly cubed.

Beef fried rice (Khaow Pad Kra Praow) with bell pepper and fresh holy basil and garlic. The rice had good toothy texture. The whole dish was well-seasoned and came together as a whole.

The green curry was, hands-down, the favorite of our group—smooth and light and fragrant with a hint of sweetness. The eggplant and bamboo shoots were very thinly sliced, so even those doubtful about eggplant will find these delicate slices delicious in this sauce. Some of us wanted to lick the bowl, and only the fact that we were in public restrained us. One of our group proclaimed it “one of the best, lightest curries I’ve ever had.”

The care that Thai-Thai’s kitchen takes with their ingredients shows in this dish. Instead of the over-sized chunks found at many restaurants, both the chicken and the vegetable are carefully chopped into bite-sized pieces, and the broccoli was cooked perfectly neither mushy nor undercooked. This sauce, though spicy, is also light with good sharp pepper in the sauce.

The sliced pork and green beans stir-fried in a homemade sweet Thai chili paste. We like this dish, but we would have liked it a bit spicier. Next time I’d try it “hot” instead of “medium”.

The mainstay Thai dish in the US, noodles stir-fried with egg and bean sprouts, topped with crushed peanuts. This may well be the best pad thai in the area. We had ours with chicken. It can be hard to stir-fry noodles, but Thai-Thai did a great job with both our noodle dishes. The thin flat rice noodles – narrower than you usually see – were cooked just right – neither too al dente nor mushy and broken.  A perfect balance of sweet, salty, sour, spicy…each ingredient was distinct and stood on its own. As someone at our table said, “Some of the best pad thai I’ve had, including in Thailand.”

Joe’s favorite (though it’s a near tie with the green curry!), this is crispy battered fish topped with a choo chee red curry sauce. The fish filets were nicely battered and fried, but this one is all about the sauce, and the sauce was sweet, spicy, rich, and wonderful. Choo chee curry is essentially a red-coconut curry that is cooked longer and hotter until it makes a popping sizzling “choo chee” noise. 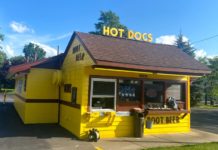