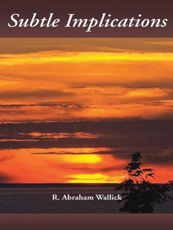 “Que Sera Sera,” Doris Day once eloquently sang—the simplicity of this statement can’t be overstated, but the complexity it conveys takes a lifetime to understand. Subtle Implications, an autobiographical piece by UM alum Robert Abraham Wallick, explores the importance of accepting this idea as truth: that humanity is a complex project, and we are all thrown into difficult life-situations. The book also delves into ideas of reincarnation, and probes the reader to embrace life’s pitfalls without the need for escaping into an other-worldly afterlife. “With reincarnation, we are always in this world. If people can accept this idea it would be a far better place,” Wallick explained to Current.

As a former Sunday school teacher with a strong interest in theoretical physics, Wallick spent his life attempting to reconcile the worlds of science and religion. Though this may be more common in the 21st century, it was definitely less so 45 years ago. The call to action, according to Wallick, is to “break through to the awareness that people are energy; we’re all made from the same material, and there’s more going on than what we can see.” This feeds back into the ideas of reincarnation that he discusses in the book.

Esoteric language aside, this is a book written with everyone in mind. Wallick's life events are written in a conversational tone, as though the reader is listening to a friend talk over a cup of coffee. As the story of his life progresses, the reader may discover that the 20th century Midwest experience is not always so boring and simple. Sprinkled throughout the book, Wallick confesses many details about his personal life that most would deem too embarrassing to reveal. When asked about this he laughed and said: “When you get to be my age, you don’t have the same inhibitions that you do when you’re young.”

The loss of innocence is conveyed throughout the book as the reader is taken from a child heavily involved with the church to a young adult who drops out of college and commits extortion against an insurance company; “The step from Sunday school teacher to Jackson State Prison was a big step, and you have a lot to lose when you make that step”, says Wallick. Later in life, Wallick is saddled with another challenge as he becomes the caregiver to his brother, who was diagnosed with schizophrenia. These examples are only a handful of the challenges and tribulations that the author has overcome throughout his life.

In it’s simplest form, the book is a personal narrative of the life-shaping events of Robert Wallick, but there is more to the story than just an autobiography; at the core of the writing is an appreciation for human suffering and loss. In his view, “We’re here in the middle of an education. We’re learning about who we are and what we are, and negative experiences are a good thing, you really pay attention when it hurts.”

Wallick's Subtle Implications was self-published in 2013, and is available on amazon.com