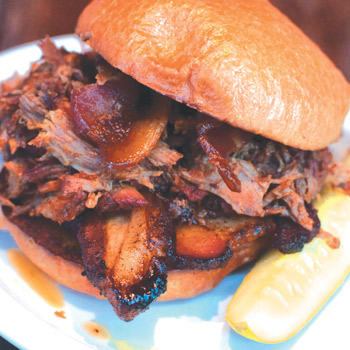 Downtown Ypsi has become a dining destination, and Red Rock is one of the reasons why. Its low-key but comfortable interior, sidewalk tables and good barbecue, coupled with an outstanding selection of (mostly) Michigan beer consistently draw crowds. Red Rock's proprietors are working to build business and community with Tuesday trivia nights and craft beer nights on Mondays. And, unlike in downtown Ann Arbor, you can usually find street parking.

Wings: crispy and salty, with a dusting of Red Rock’s spicy seasoning, these were an across-the-board hit. One of our friends comes to Red Rock specifically to get these.

Black & Blue Pizza: smoked brisket, blue cheese and greens on a very thin, perfectly-cooked crust with a balsamic dressing. While it departs from the barbecue theme, the flavor combination stands up well.

Burnt Ends: traditionally, “burnt ends” are exactly what the name implies: the tastily overdone bits at the end of the brisket or other meat. The obvious problem is that those bits are a very small percentage of the meat, so you’ll run out if they become popular. When Red Rock first opened, it looked like they were deep-frying pieces of brisket to get extra caramelization—now, though, these are chunks off the brisket, likely cooked a bit longer, and tossed in extra dry rub with pickled jalapeños. Unlike Kansas City-style burnt ends, they aren’t served in sauce. Highly recommended. Joe could just order these and a couple corn muffins and call it dinner.

Rock Burger: a smoked beef burger topped with pulled pork, accented with onions and jalapeños on a pretzel roll. We enjoyed it.

Tres Cerdos: the “three pigs” of the name are pulled pork, pork belly and bacon, together served on a brioche roll. It’s excessive on some level, but works well.

We’ve eaten a lot of barbecue in a lot of places. Red Rock doesn’t neatly fit into a specific regional style; like most places in Michigan, they’re kind of doing their own thing. They offer four sauces: Red Rock (sweet tomato-based), Hawaiian (Red Rock but with more spice and a bit of citrus), Eastern North Carolina (vinegar and pepper-based but make sure you shake it up thoroughly), and South Carolina (mustard-based).

Pulled Pork: shredded (as opposed to chopped like you’d see in North Carolina), nicely smoked, reasonably moist and tossed with a little sauce. We really liked the Eastern North Carolina vinegar sauce with this, but it goes fine with the others too.

Beef Brisket: slices of brisket; not as smoky or as moist as the best we’ve had, but still very good. Great with the Red Rock or Hawaiian, and you can also sprinkle rub on it.

Smoked Chicken: super flavorful, but on the dry side. Great with the sauces.

St. Louis Spare Ribs: St. Louis is one of the few places we haven’t tried BBQ, so we can’t judge authenticity, but the ribs are good: meaty, with a thick crust of rub and a lot of flavor. Their moistness can vary, but we’ve liked them every time, and they don’t even really need sauce.

No barbecue is complete without sides! Red Rock lets you pick two with entrees, and additional orders are pretty inexpensive.

Cowboy Beans: a barbecue staple, these beans are generously adorned with Red Rock sauce and a lot of pulled pork and bacon. Not good for vegetarians, but great with the meat.

Collard Greens: also very unsafe for vegetarians, as they’re made in the traditional manner with plenty of pork. But tasty!

Corn Bread Muffins: if you crossed cornbread with those corn cakes they used to have at Chi Chi’s, you’d get something like these. They’re sweet and soft and they always taste great, with one caveat: depending on factors we don’t fully understand, they can be gummy. See if you can get them fresh from the oven.

Sweet Potato Mash: exactly what it says, these mashed sweet potatoes are like Thanksgiving in a cup. If you like that, you’ll love them. 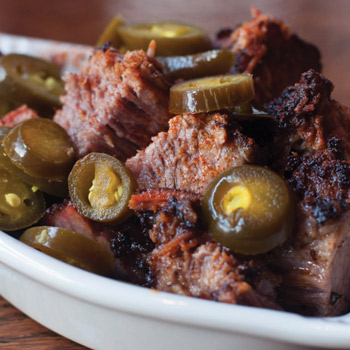 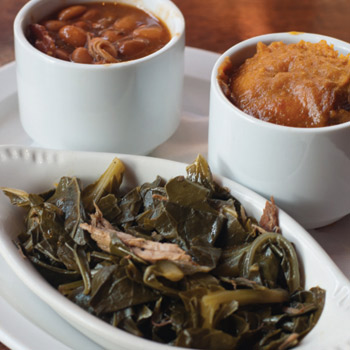 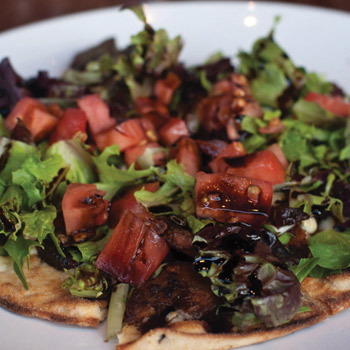 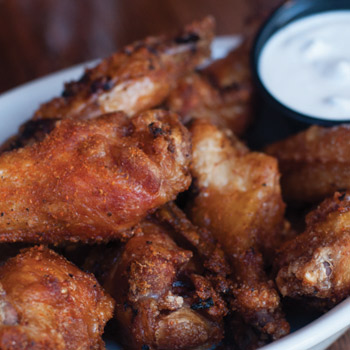 Lisa and Joe have been blogging about food in the Ann

Arbor area (and points beyond) since 2004. Check them out at kitchenchick.com.