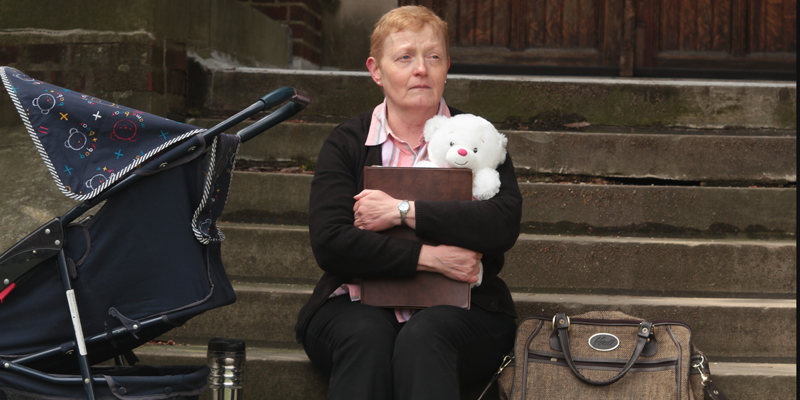 The Redbud Production Company, a family owned and operated theatrical company based in Ann Arbor, is completing their seventeenth season with a prize winning dramatic play, Luna Gale.

Luna Gale, written by Rebecca Gilman,  was named the 2015 best play of the year by the American Theatre Critics Association. The Michigan premiere of this fine drama opens Thursday, June 2 with additional performances throughout the weekend.

In today’s theater world, with companies and venues closing across the country and in Ann Arbor, how has Redbud kept it going for 17 years?  They have produced, directed and performed many outstanding dramatic plays of the 20th and 21st century, including Steel Magnolias, Come Back Little Sheba, Wit, Harvey, The Children’s Hour, I Never Sang for My Father, Vanities,  Broadway Bound, The House of Blue Leaves, The Heiress, Proof, August: Osage County and others.

Tim and Loretta Grimes, who started Redbud in 1999,  are both graduates of the American Academy of Dramatic Arts and returned to Ann Arbor after graduation (Loretta is an Ann Arbor native and Tim hails from New Hampshire).

They teach the Meisner Method in acting classes for adults and high school students. Named after the  famous New York Director and Actor, Sanford Meisner,  students learn the theory of acting and practice by participating in scenes with fellow students.  In fact, many students, beginning and experienced, ultimately act in fully staged productions.

Jenny Pritchett started acting classes with Redbud at the age of eight and found the training incredibly helpful in learning acting techniques as well as skills such as listening carefully, memory training, learning and interpreting the meaning of language and the introspective, emotional aspects of people.  Now a college graduate, Pritchett credits her training at Redbud with the positive accomplishments in her life.

With Redbud’s  history of successful performances and their demonstrated ability to teach and train actors, Luna Gale will be a ‘must see’ dramatic play.

A baby, Luna Gale, is taken to the emergency room of a local hospital by her parents due to a stomach ailment.  A children’s welfare worker, Caroline, becomes aware of the situation.  She is alarmed upon meeting the young couple, who are the parents of the child. It becomes clear that the parents are drug addicts while displaying other types of family dysfunction. Caroline informs the parents that they will not be able to retain custody of their child until they prove that they have the ability to take care of her.

When Luna Gale’s grandmother proposes that she take care of the child, there is a sense of relief for the Children’s Protective Agency, bolstered by the agency policy that a family placement is superior to a foster home.

Complications arise when the grandmother, Cindy, applies to gain permanent parental rights over the baby, causing a conflict for Caroline, who must determine the appropriate placement for Luna Gale, while dealing with an uncaring, bureaucratic supervisor who is openly hostile to her.