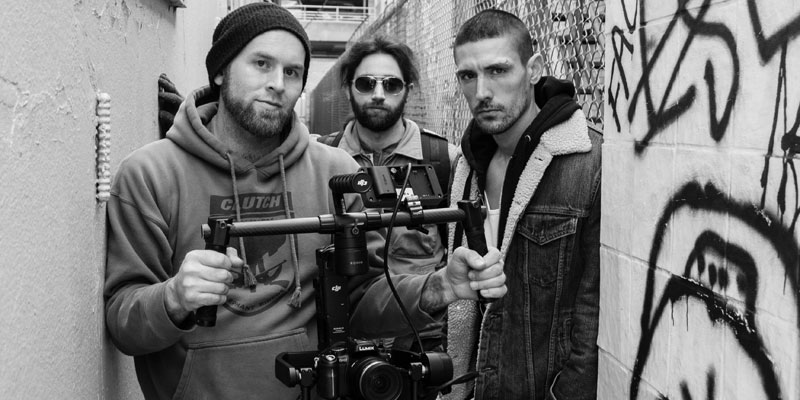 There comes a point in every artist’s journey, when the skip down the lane of amateurish endeavors in the world of creative expression arrives at a fork in the road: Do I continue creating as an amateurish hobby, or set my sights on a professional career?

Filmmakers Drew Williams (who lives and works in Ann Arbor) and Steve Weed (who lives in Detroit) are currently taking their first steps towards following their dreams of professional celluloid storytelling with their short film Residents — a story about two brothers and their search for utopia in Detroit. Having made short films for local competitions and winning top prizes, “We figured that we were on to something and should pursue making movies as more than just a hobby,” said Residents cinematographer Williams.

Current caught up with the Ann Arbor/Detroit based filmmakers-by-day, bartenders-by-night to find out more about their forth-coming production dates, and inquire whether they need any help with casting – so you actors, near and far, get your film audition technique tweaked!

Current: What is it that you want to say with Residents as creatives?

Williams: As creatives, what I’d say is that with the right vision, anything is possible. Residents, from my perspective, is a story about confronting demons, which is something that I can relate to. Saying that, I feel it’s a necessity to shed (or at least attempt to) any bad “mojo” from your past in order to see a brighter future.

What do you hope this film will do for your careers in film?

It’s my hope that it will get us on the map a little, you know? Get it into some festivals, get it in front of an audience. Sometimes it only takes one person to give you that ticket over the bridge. And we just want to be able to keep making movies because it’s what we love to do.

What have you learned from your past films NOT to do in this film production? What will you repeat?

With filmmaking, it’s a constant learning curve. My main focus being cinematography, I’m always critiquing my work from past shoots. ‘Next time I’ll do this, because that happened this time,’ and vice versa. It’s about making mistakes and learning from them. One thing I know we will repeat is our desire to make every shot the way we want it. Not to settle for something when if you just wait 20 minutes for light to be right, or whatever. Just making the best film possible.

Where do you want to be in five years? Ten?

I guess in five years I’d like to be running a studio/production company while continuing to make movies. Just creating, and helping other people take their visions and turn them into a reality. Ten years? Hell, can’t say I wouldn’t mind strolling across that stage to give an Oscar speech (laughs).

What’s the plan once the film is complete?

We want to be able to submit to as many festivals as our bank account allows. I know Steve and I have also discussed arranging a screening of some kind. I know some people over at The Michigan Theater, so maybe something could happen there.

Williams and Weed are still working on casting. Here are the characters they have available (actors take note!):

Leo — The younger brother of Max. Leo grew up in the city. Life was hard and he had to fend for himself. Max wasn’t around and their father had his own demons. Leo gets into trouble, but nothing he can’t handle until the end, when he’s in too deep. His main objective is to once again believe that life could be better.

Leo’s Look — Leo should be mid-to-late twenties. Should be able to look like Max’s younger brother (one year apart). Leo should have darker hair with dark features (facial hair, eyebrows). Leo’s look will be rugged and roughly maintained.

Leo’s Emotions — Able to act with high emotion. Times when he says he is ok he truly is not.

Leo’s Girlfriend — Mid to late twenties. Young and beautiful. She loves Leo and knows his troubles. She respects and is loyal to Leo. She is unsure of Max’s intentions.

To contribute to the making of Residents,
visit Indiegogo.com and search for Residents – Independent Film.
For casting questions, email residentsthemovie@gmail.com