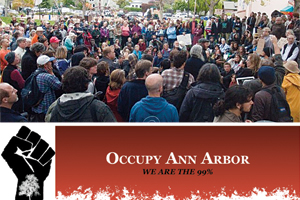 The Occupy movement has gained momentum through 2011 and is primed to be a major factor in the important election year of 2012. As a part of Crazy Wisdom’s ongoing salon series, Alan Haber and Odile Hugonot Haber will be on hand to discuss the movement’s importance, deconstruct the movement’s progression and debunk myths on Thursday, February 2. Both Alan and Odile have been involved with Occupy Ann Arbor since the beginning and they invite supporters, skeptics and opponents for an evening of lively civil discussion about the growing political impact of Occupy Wall Street. 7pm. Free. Crazy Wisdom Bookstore & Tea Room, 114 S. Main St. 734-665-2757. www.crazywisdom.net