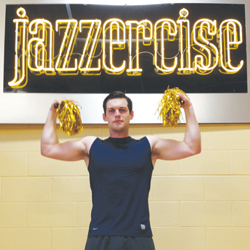 Sometimes a good sweat on Friday night is a great start to the weekend. Current Staffers Charles and Emily headed to Jazzercise last week to blow off some steam, learn some new moves, and break the stereotype that it's only middle-aged-moms bouncing around in leg warmers and sweatbands.

Twenty-two-year Jazzercise veteran, Joy Bucher, led the class inside her Ann Arbor Studio. (She also owns another in Saline.) She guides her students in the basic principles of fitness, friendship and fun while making sure to work the arms, core and legs.

Right now, you're probably picturing something that looks like Jane Fonda in the 80's, but put aside what you imagine when you hear "Jazzercise." In the front row was a 22 year old University of Michigan student on one end and a spry, grey-haired woman in her mid-70's on the other. Then somewhere towards the back was a fearless male named Charles who was not afraid to pick up a pair of pom poms.

Charles: When I was hired on to work for Current, I never thought I would find myself in a Jazzercise class.  Frankly, up until that point in my life, Jazzercise was not on my radar.  I consider myself to be fairly athletic, and try to stay healthy and in good shape; so surely, I thought, there would be little for me to gain by taking such a class.  I found out quickly how wrong I was.  The first 10 minutes of the hour long class were what I expected Jazzercise to be.  We moved to music with some basic steps and arm movements, loosened our muscles, and worked up a light sweat.  But that was just the warm-up.

Soon Joy was demanding a faster and faster pace (all why singing along to our motivational sound track), and kept us moving constantly.  There is no stopping in Jazzercise, no breaks, just the next song and the next steps.  I hung in though! Sure I was sweating buckets and my heart was pounding, but I was right there keeping up with the best of them.  It was at this point that we moved to strengthening our core and our legs, and things quickly broke down.  By the end of this segment of the class I was beat.

After a quick cool down session, all I could do was thank Joy for kicking my butt up and down the Jazzercise floor.  It might not have ever been on my radar before, but it certainly is now – if you are looking for great group workout that keeps you moving with encouragement, than you might just want to check yourself into a Jazzercise class.