Morning sounds of the city 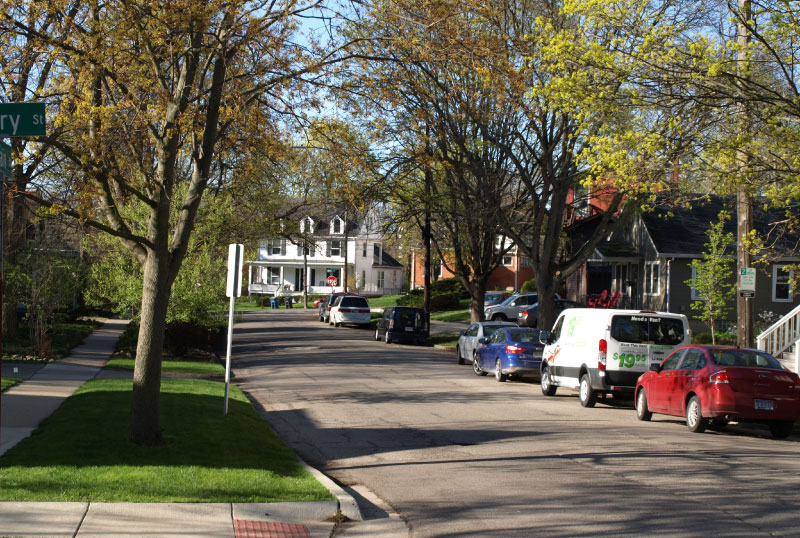 On several recent mornings while walking to work, I tried to practice listening. The trees in my neighborhood had yet to leaf out, and the cool air brimmed with calls and songs from doves, chickadees, blue jays, robins, starlings, and sparrows, as well as other species whose voices I didn’t recognize. Every couple of blocks, a cardinal proclaimed itself from a high branch, its song, a sequence of shrill bursts, down-slurs, and trills that reminded me of a car alarm.

Between the birdsong above and my footsteps below, the neighborhood was mostly quiet. My mind wandered— thoughts of work, money, breakfast, family, and friends—to echoes of past conversations or the noise of my to-do list. Last fall’s dead leaves skittered along the street’s gutters.

One morning, a door closed, and a woman and child descended the front steps of a house on the opposite side of the street. The boy, no more than 3 or 4 years old, shouted as he stepped on a Razor scooter and took off down the sidewalk. I did not see him fall a few seconds later, but I heard it: the clatter of metal against cement, the wail. The woman running to him, her words swallowed by his cries. Within a minute, the sobs had stopped, and then again came the jangle and clank of the speeding scooter, the woman yelling for him to stop and wait at the corner.

Vehicles drove by. Normally, I tuned them out, but for these few days I concentrated on each car and SUV, tried to hone in on different frequencies, the rumble of tires against the road, the purr, growl, or whine of an engine, and the dulled pulse of music from the radio. There are those people who are fluent in the language of motor vehicles, who can discern a worn-out belt or a failing pump, who can recognize the difference in timbres between the engines in a Honda Civic and a Dodge Grand Caravan. I’m not one of those people. Downtown was a babel of morning traffic, punctuated by a manhole cover being run over, the chirp of the city’s public buses turning, and the engine chug of a school bus.

Pedestrians hurried to get somewhere. No one busked. Some people wore earbuds and Beats, keeping their music to themselves. The sounds people made were purposeful, focused, and assertive. There was the crack of footfalls from a man wearing leather loafers and khaki pants as he strode into the Washtenaw County Courthouse. While crossing Main Street at Huron, a woman in a beret held her hand up against the grille of a box truck that was blocking the pedestrian crosswalk and waiting to turn. “I’m going to cross! Don’t run over me!” she told the driver, whose window was closed. He honked at her in reply. I crossed paths with dozens of people. Four greeted me with “Hello” or “Good morning.”

I’ve walked to work for years, guided by sight and touch: eyes focusing on where I want to go, feet rising and falling from the ground, a physical act of progress and accumulation—things seen and distances covered—that has the effect of confirming my identity as an Ann Arborite. I know the quickest route to work, dips in the sidewalk where rain pools in spring and ice lurks in winter, the location of downtown sparrow nests. Walking is one way of learning a place, of mapping its geographies and becoming acquainted with its inhabitants. Walking with the intent of listening, though, uncovered numerous gaps in my knowledge—of birdsong and its meanings, of engines and their workings, of people, their thoughts, feelings, and stories. The intricacies and temporality of sound reveal how much of this city, any city, is ungraspable and mysterious, worth exploring again and again.

Stephanie Douglass Carpenter lives in Ann Arbor.
She writes poetry, engineers the WCBN radio talk show Living Writers, and serves on the board of directors for the Bird Center of Washtenaw County.