Strikers, to the Line! 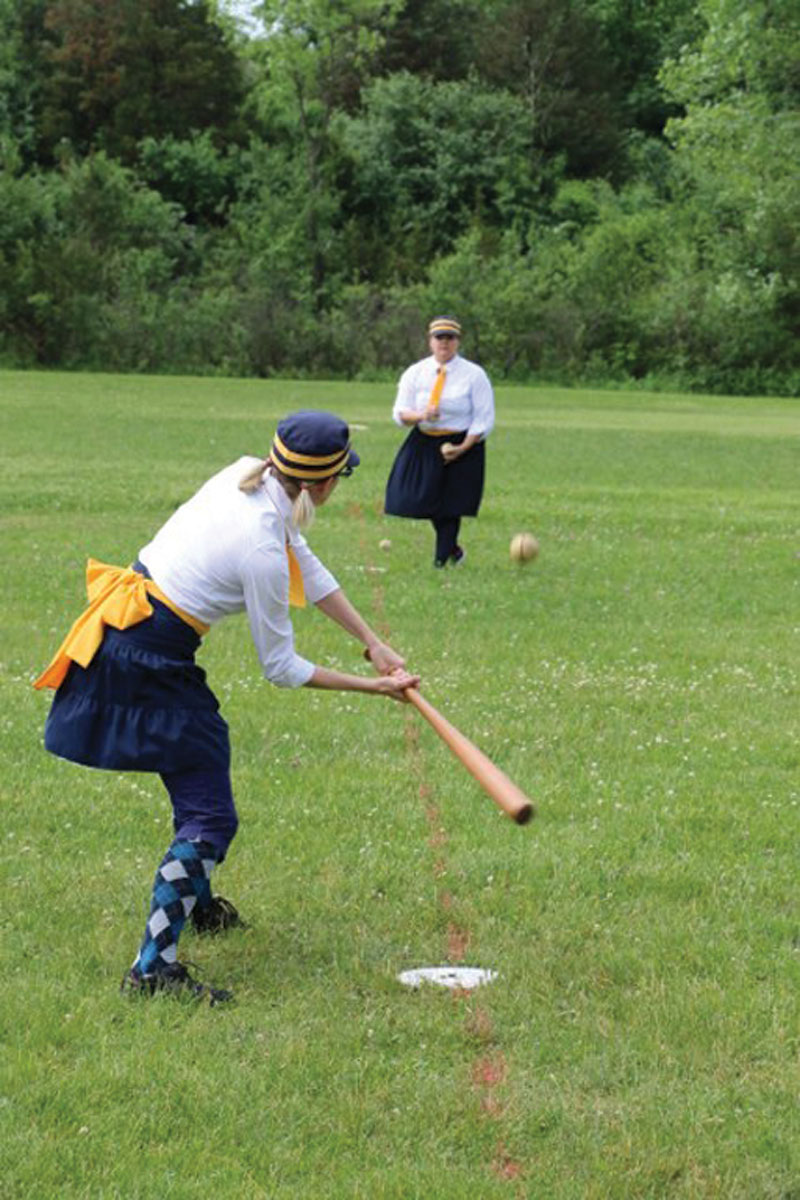 Is there a sound more evocative of summer than the crack of a wooden bat on a horsehide ball? Listen more closely, and you may hear someone call “Well played” or “Leg it, striker!”  This is the sound of an earlier time, an era of epic savagery on the battlefield and honorable comradeship on the playing field, when pitchers were ‘hurlers’, batters were ‘strikers’, ‘ballists’ had colorful nicknames and ‘cranks’ gathered to watch them compete. It’s America’s favorite pastime as it was experienced during the Civil War, and played today by the ladies of the Merries Vintage Base Ball Club of Chelsea.

Elizabeth “Ginger Snap” Van Hoek got involved with vintage base ball through her husband’s participation with Chelsea’s men’s team, the Monitors. Although she had never played league sports before, she formed a sister team, the Merrimacks (aka Merries) last year. An industrial engineer working in product service administration at St. Joseph’s Hospital, Van Hoek was less drawn to the game play of the club than its relationship with community. “I’m really proud of the Chelsea community and how they’ve embraced vintage base ball,” she says. “Not being a sports person, if that attraction wasn’t there, it just wouldn’t be something I would want to spend my time on.”

The Merries are one of a handful of ladies vintage clubs in the area. They observe a certain level of authenticity. While some teams may wear full length skirts and boots, the Merries’ uniforms are long-sleeved white shirts, a skirt with ‘bloomers’ or pants underneath, and high stockings, “not scandalous, but practical!” Van Hoek admits, “There are probably a few things we do that aren’t historically accurate. If we can play and try to be as authentic, or at least as respectful of those things as we can, and people who come to watch feel they’ve had a family-friendly … community-building experience, and all the ladies who played… had fun and feel like they gave it their all, to me, that trumps the authenticity.”

On a steamy afternoon, “Ginger Snap” encourages her teammates during a practice. “Well held!” she calls to an outfielder after a bare-handed catch.  The rules of the game circa 1860 don’t allow for mitts. That’s one of the significant distinctions between baseball of today and the game as played by vintage teams. “We are a ‘bound’ team. You can catch the ball on one bound, one hop, one bounce off a tree or the ground, and it can still be an out. That is probably the biggest difference. Some of the vintage teams do play ‘on the fly’, which means they don’t use that rule,” she explains.

The rules of base ball (spelled as two words in the 19th century) were not yet codified in those days, and there were no umpires. Then as now, this necessitated consensus between competing teams on which protocols to follow. “There isn’t anyone calling the play.  They’re not calling the runner out. That’s really up to the players,” Van Hoek clarifies. “It’s a different mind-set. You try to defer to the runner; you try to solve it yourself.”

Politeness and cooperation are hallmarks of vintage play. You’ll hear more rough language at an Amish quilting bee. Shouts of “Well struck!” and “Huzzah!” come from players and fans (cranks) alike, regardless of which team triumphs. “We can appreciate the effort of both (teams), and that gets carried off the field.” The home team often hosts a post-game meal.  “They’re really there for the fun of it, for the camaraderie.”

That camaraderie extends to the make-up of the team. “We’re really a group of friends, first.  To me, that’s the most exciting thing.” Some members are experienced sportswomen, some have no sports background. The ages range from recent high-school grads to Van Hoek’s own mother-in-law. “We try to be really inclusive.”

The Merries embody a time when sportsmanship was the hallmark of games, and a summer afternoon on the village green meant a bucolic communal experience. “The fact that vintage base ball relies on relationships is something that can bring you a lot of joy … you can’t go to a game and only be there for yourself and your own team. You have to think about and protect those relationships,” Van Hoek concludes. “You’re really accountable for your behavior and the spirit you bring to it.”