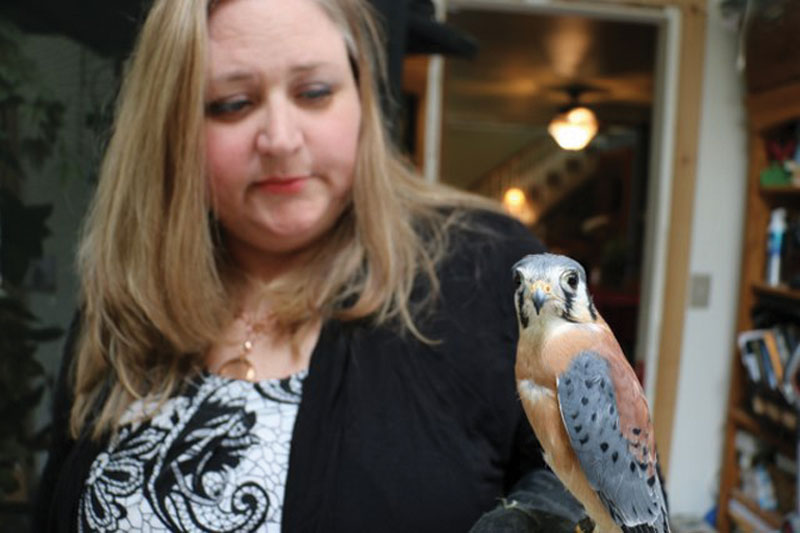 The little Eastern Screech Owl is molting, giving her the look of a plush toy that’s been pulled through the shrubbery backwards while wet.  She’s about the size of a mango and cute as a bug’s ear, and I resist the urge to tousle her head.  This compact bird of prey is giving me the stink-eye it usually reserves for a particularly tasty-looking vole. It perches on the thickly gloved fist of Kim Poisson. “If screech owls were any bigger, we’d all be in trouble.  They’re feisty little birds,” admits Poisson, a licensed raptor rehabilitator.

Rescuing hawks, owls, falcons and other raptors is Poisson’s calling.  She became interested in rehabilitating wildlife after encountering injured bunnies in her yard, and feeling frustrated that she didn’t know how to help them.  It’s not a process for casual amateurs.  "Here in Michigan, if you want to be a wildlife rehabilitator, you have to take a course through the International Wildlife Rehabilitation Council," she explains.  "You take a two day course, then take a test, and when you pass that test you take your certificate and submit it to your state agency to apply for your state permit."  And that’s just for mammals.  Caring for birds requires more testing, mentoring, and hours of volunteer work, as well as establishing an appropriate facility for treatment and rehabilitation.  Poisson is licensed by both state and federal agencies.

"Most of the birds of prey that I see are either weakened after they've left the parents or prior to migration, or hit by cars."  Poisson can perform a number of non-invasive procedures, such as wrapping broken bones or treating for parasites, but surgeries and sutures require a veterinarian.  Treating an injured raptor is considerably more demanding than rehabbing a mammal.   "They are athletes.  We can't just say 'OK, your wing is better now, have a nice life,' and open the door. We have to put them in successively larger flight cages to build stamina, and we have to make sure the lazy birds, like the Red Tail Hawks that will sit there all day, are actually exercising and we're making them move around the enclosure."  When the birds are just about ready to be released, they go to "Mouse School", a large flight enclosure equipped with video cameras "to track how successful these birds are while they're hunting live mice in there. That way, we're assured that when we release them they have the skills …to   be successful."  Her reward?  "When you put weeks and weeks, sometimes months, of work into this bird, and to be able to watch them fly away is amazing.  That's the best part."

Sadly, many of the birds she sees cannot be helped.  “A lot of what I have to do is humanely euthanize because the physical needs of these birds to survive in the wild as a predatory bird are so great that if they have any kind of deficit that's going to keep them from hunting successfully… eventually this bird's health is going to decline to the point where I didn't really do him a favor."

A fortunate few of the raptors who can’t return to the wild become Animal Ambassadors, visiting schools and science centers for educational programs.  This is the most satisfying part of Poisson’s work.  “My greatest success is not one single event, but the fact that I'm able to work with kids and share wildlife with them, and that I think is phenomenal."  She reminds all of us that we have a part to play in supporting raptor communities.  “We can reduce our chemicals and rodenticides.  Hang a nest box for a screech owl or a kestrel.  One of the greatest things we can do is not throw stuff out when we're driving."  Organic waste on roadsides attracts the small mammals that raptors prey upon.  "If you start with something small, it works into something big."

For Kim Poisson, these magnificent birds are part of a larger story.  "To me, it's a fascinating process to watch how they land in our ecosystem. They're a point that provides a lot of balance for the predators above them and the prey below them.  They're a very good indicator for how healthy our ecosystem is."

Interested in helping out or learning more about the birds?
Visit a2raptorrehab.com

Do you know someone doing something creative, offbeat, weird, or delightful?
Email Sue Dise at: sedise@yahoo.com