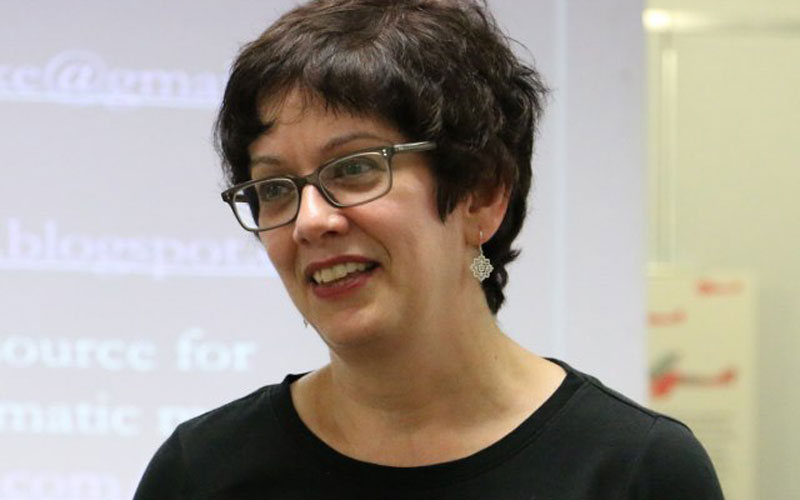 It’s a recent Wednesday night at the downtown Ann Arbor District Library, and a couple dozen people are gathered in the multi-purpose room to learn a new language. The woman addressing them is speaking English, with the occasional French or Latin word thrown in, but one senses this class wrestles with a tongue that goes beyond mere words. In fact, they are learning to describe a most evanescent thing— smell.  “Americans don’t have and are not comfortable with an olfactory vocabulary,” observed Michelle Krell Kydd, the host of this “Smell and Tell” presentation. “The sense of smell is neglected in education.”

A mission of olfaction

Remediating that omission is Ms. Kydd’s calling. She is a missionary of olfaction. While she works as a Communications Specialist for inter-disciplinary activities at U-M, her avocation is promoting the world of smell, the most underrated of our five senses. “We live in an ocular-centric culture,” she concedes. “Our sense of smell allows us to ferret danger; it helps us to build memories. It’s also the first sense to go when you have a neuro-degenerative brain disease. It’s in science; everyone is interested in it.”

Kydd has long been intrigued by scents, collecting perfumes and essential oils for years. She worked for fragrance trade publications and took classes at the Fashion Institute of Technology, learning about the science and art of scent.

Her real inspiration for sharing her knowledge began, like all good stories, with her pursuit by a Frenchman. While passing a restaurant one day, she was followed down the street by the chef, who was entranced by the perfume she was wearing. It had transported him to his childhood. “I could see a young boy’s eyes looking at me, and I thought ‘Wow, the next time a four star chef stops me in the street to ask me what perfume I’m wearing is going to be in the afterlife. Who made this?’ My career started with that question.”

Following a move from New York to Ann Arbor several years ago, Kydd approached local non-profit 826michigan with an idea for a scent program. “It took off, and then I thought, why can’t I do this for adults?” She approached the AADL, and “Smell and Tell” was born. It has clearly struck a nerve here, as she has presented almost 30 “S & T” workshops since 2012. “You have a diverse population across age and culture. You have people who are hungry for knowledge; they go to bed hungry for knowledge. They want to know who they are, that’s always evolving.”

Learning something about yourself is a key element of scent awareness. “Because smell is so closely tied to memory and identity, you discover who you are,” Kydd explains. “There isn’t a wrong answer when someone goes to describe something, because they’re reflecting on their own memories and how their senses work. It’s different for everyone.”

At this evening’s “S & T”, people sample scent strips and share their impressions. The same odor may elicit quite different reactions. It is highly subjective, this sense of smell, and one person’s perfume may be another’s stink. And, while the observations are deeply personal, there is a remarkable sense of acceptance in the room. Kydd observed, “The level of intimacy you’re able to achieve with people when you’re talking about memories and you’re also creating a safe space is tremendous, and there aren’t many things that can do that.”

Kydd believes that everyone can develop an enhanced sense of smell, and the lexicon to define it. One also needs to become more consciously focused on the aromas surrounding us. “You have to practice being aware. I think you have to get over the ‘Oh, it smells!’ part of our culture has been perpetuating for centuries.” The reward is a more intense sensory experience. “Your life will become three-dimensional. The thing is, it’s so addictive once you have it, because you’re a human being and you were meant to have it as your primary sense.”

Learn more about Michelle Krell Kydd at her blog glasspetalsmoke.blogspot.com