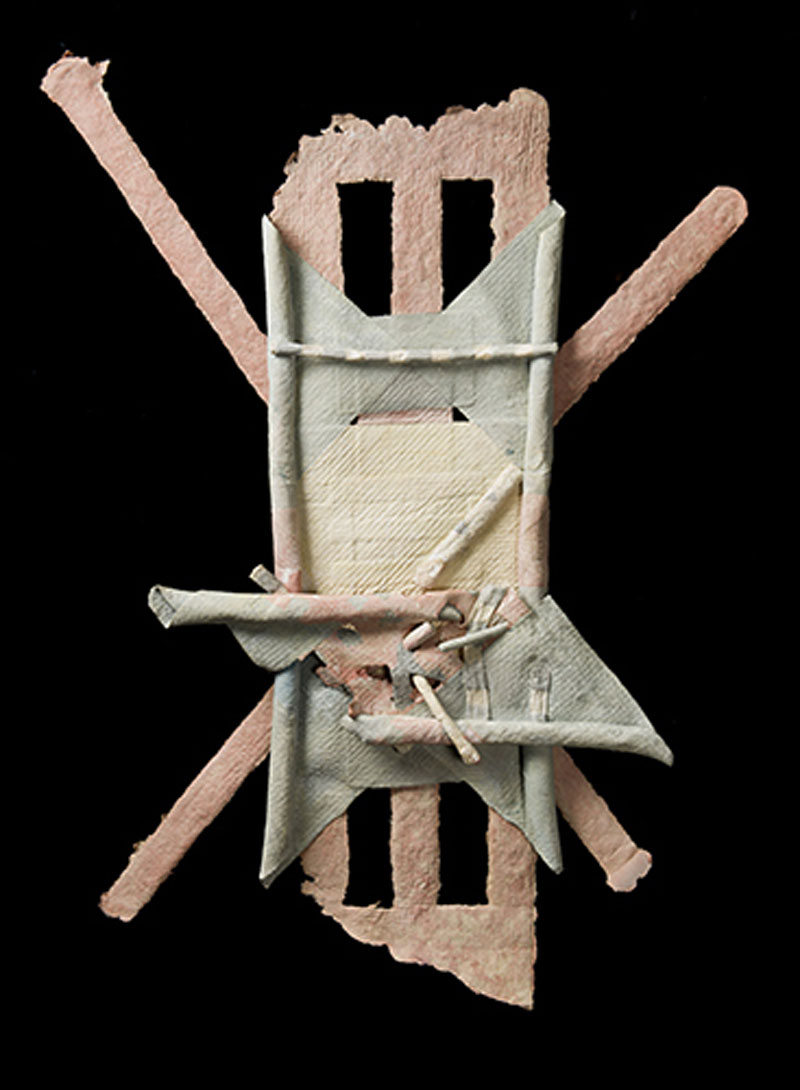 I’ve known Ted Ramsay for almost 30 years. I first met him in the mid 1970s when I took an elective introduction to art class. Suffice it to say that we’re both older now and that I refuse to subtract. Ted was one of the most influential teachers I’ve ever had, in any field. With patience and generosity and incisive encouragement, and without letting me know it, he allowed me to understand that I had no future as an artist.

Ted has been a pillar of the Ann Arbor art scene for more than a half century, and he’s not slowing down. His current exhibition, “The Paper Trail: An Artist’s Journey” at the WSG Gallery runs through July 25. Papermaking has been his great love. It originally afforded him the chance to put his drawings and paintings on unique surfaces and then to incorporate images into the paper itself. The WSG show is a selected grouping of his paperwork. Ted joined this fine artist co-op a few years ago, and it is only fitting that the Clay Gallery sits across the street, where his beautiful wife, Marcia Pollenberg, the super-ceramicist, is a member.

Professor Emeritus now at the University of Michigan Penny Stamps School of Art and Design, Professor Ramsay earned his B.A. in studio art and an M.A. and M.F.A. in painting and art history from the University of Iowa. He also holds an M.F.A. in fibers from the Cranbrook Academy of Art in Bloomfield Hills. Professor Ramsay’s work and philosophy have been published in major academic texts, including “The Art and Craft of Papermaking” (1992), “Sculpture:  Technique-Form-Content” (1989), “Glas & Keramiek” (1988), “The Art of Papermaking” (1983) and “Emphasis:  Art” (1965).  He has traveled the world studying the subtleties of materials and techniques, and teaching and attending ancient hand-made papermaking workshops in Thailand, Myanmar and China, as well as contemporary “sheet forming mills” in Spain, the Netherlands, Australia and Japan. One of his happiest pickups was a Hollander Beater, developed by the Dutch in 1680. The machine made paper pulp ten times faster than any other process and made the resulting paper far stronger than any other. Professor Ramsay’s work has been exhibited in major one-person shows around the world, from New York, Chicago and Los Angeles to Hawaii, South Korea, Israel, Germany, and Hungary. Professor Ramsay still teaches UM courses in basic undergraduate and advanced studio courses in drawing, painting and papermaking. For five years he chaired and directed the operations of the Slusser Gallery committee, directing the famous A&D gallery on North Campus.

His work is also represented in prestigious corporate and instructional collections. From his Huron River Studio Papermill he now specializes in the casting and painting of his personally handmade paper. I love that he created two handmade books used in the ceremony to inaugurate Lee Bollinger as the 12th President of the University of Michigan. My favorites of Ted’s oeuvre are his epoxy/polyester images, friezes, really, sculptures that emerge from a flattish surface and affix to a wall. Maybe it’s because I worked in a business that had one of them on the wall, and it hypnotized me and everyone else who saw it. I called Ted to ask him if my memory were deceiving me, because I think the old machine he made them with burned down years ago. He was out of the country. Where was he? Your guess is as good as mine, but it’s got to be cool.