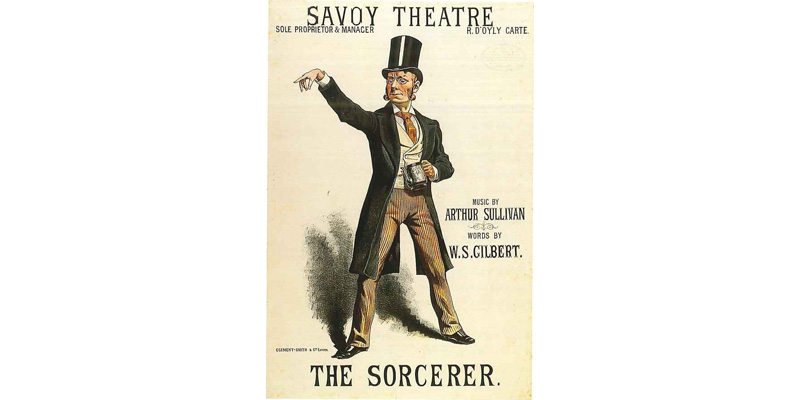 Founded in 1947, The University of Michigan Gilbert and Sullivan Society (UMGASS) is the oldest student-run society in America dedicated to the operettas of Sir William Gilbert and Sir Arthur Sullivan. Every year, the society organizes students and civilians from the community for two fully staged productions from the 14-operetta Gilbert and Sullivan canon, always with live orchestra accompaniment and always at the sublime Lydia Mendelssohn Theatre within the Michigan Union. And always the audience stands and sings “God Save the Queen” before the performance. (The words are in the playbill and the melody is the same as “My Country Tis of Thee.”)

UMGASS is widely recognized as among the finest G&S societies in the world. Some of the orchestra members and Board of Directors have been with the group for more than 30 years, providing a continuity and standard of excellence that shows in every performance. It’s a labor of love for cast, company and audience alike, even for a newcomer like me. I only started attending 14 years ago.

Gilbert and Sullivan formed the quintessential Victorian theatrical partnership, collaborating on comic operas between 1871 and 1896. W.S. Gilbert was the librettist (words) and Arthur Sullivan composed the music. They created a “topsy-turvy” musical theater of the absurd that hasn’t really been seen before or since. The 1999 movie Topsy Turvy directed by Mike Leigh depicted the first staging of The Mikado in 1885. It showed the actors and producers and hangers-on, the auditions, rehearsals and opening night audiences enraptured as they follow their libretti and swoon to the greatest light opera– perhaps the greatest pop music– ever written. And the film showed the tortured process of creation and collaboration between G&S, immortal bards of a civilization at the apex of an empire on which the sun never set.

This month, UMGASS stages The Sorcerer, which originally opened in 1877, the third G&S production, and one of my favorites even though posterity has given more attention to H.M.S. Pinafore, The Pirates of Penzance and The Mikado. The Sorcerer has all the classic G&S character types and range of songs: comic duets, patter songs, contrapuntal double-chorus, tenor and soprano love duet and the rest. To put it more crudely, The Sorcerer, like all G&S, has an absurd premise, songs with hypnotizingly clever lyrics and music that plays up the humor of the words. Hence unprepared viewers can be put off because they don’t know what the hell is going on and can’t understand all the words, which at times go by at a rapid-fire pace.

Let me propose a solution that worked for my son when he was 12 and in every subsequent year. First, read a brief synopsis of the story, like the one below, or seek a better one (as if) on the internet. The playbill will have an excellent plot summary for a quick review once you’re seated. Second, back to the internet, read through the libretto. You can then follow the lyrics more easily as they’re sung and you can look up words that may be archaic to the modern ear. Not everybody today knows that a philter is a love potion– stuff like that. The playbill also has a small lexicon of arcane words and references. This is not homework, mind you, but intended to bring you up to speed so you can relax and enjoy the show. Fortunately, UMGASS casts invariably sing very clearly.

It’s the village of Ploverleigh. Beautiful, rich Aline is engaged to handsome, rich Alexis. His father, Sir Marmaduke had once been in love with her mother, Lady Sangazure. A simple village girl, Constance is secretly in love with the local Vicar, Dr. Daly. Her mother, Mrs. Partlet is secretly in love with the old local Notary. So that all can be as happy and in love as they, Aline and Alexis consult the village sorcerer, John Wellington Wells, for a love-at-first-sight philter with which to spike the tea at the village picnic. (You can see where this is going.) Sir Marmaduke flips for humble Mrs. Partlet. Lady Sangazure gives her heart to the sorcerer, Mr. Wells. Constance falls head over heals for the Notary. Aline drinks the tea to cement her love for Alexis but she catches sight of Dr. Daly as the potion kicks in and she falls madly in love with him. Things get dicey, of course, but finally the sorcerer, at great personal sacrifice, saves the day and the inevitable, proper couples pair off, Aline and Alexis, Sir Marmaduke and Lady Sangazure, Constance and Dr. Daly, Mrs. Partlet and the Notary, and all’s well that ends well.  The Sorcerer runs at 8 pm December 8, 9 and 10 and  at 2 pm December 10 and 11. The best part:  tickets range from $8 to $12 for students, $15 to $21 for seniors, and $16 to $24 for adults. You can’t beat it; join it.