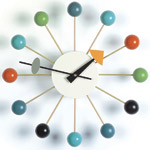 As readers and fans well know, less than an hour from downtown Ann Arbor, even without breaking the speed limit, is Cranbrook. At the Cranbrook Art Museum, through Sunday, October 14, is George Nelson: Architect, Writer, Designer, Teacher. It is the most comprehensive retrospective of his work ever staged – 120 iconic pieces. If you don’t really know who George Nelson was, this is compulsory. And a guiltless pleasure.

CAM’s show was put together by Vitra, the legendary German reproducer of Mid-Century Modern decorative art, and this is the final stop for the exhibition before returning to Germany. Nelson died in 1986, having spent his last three years as a professor of Design Research at the University of Michigan.  Walking through the exhibit, I kept thinking, “I didn’t know he did that.” And that. More than art, George Nelson invented the bulwarks of modern design including the concepts “Living Room,” “Office Cubicle,” and “Modular Storage.” Everybody knows him for his Bubble Lamps and Ball Clocks, but he did everything, including advertising posters, like the one with Marilyn Monroe displayed here for “The Misfits” (1961).

George Nelson studied architecture and art history at Yale in the Roaring Twenties. In Europe he made friends with Mies van der Rohe, Le Courbusier and Walter Gropius, head of the Bauhaus. He was drinking buddies with Buckminster Fuller and he drove a Jaguar XK-120. After the war he was made Director of Design by Herman Miller, the far-sighted furniture maker that put Zeeland, Michigan on the map. There he hired Charles and Ray Eames and other Cranbrook artists like Harrey Bertoia to create American modernism. It was what war-weary America wanted: something completely different, a break with the past. It was called modernist at the time but even today it looks futurist to me, more an inspiration for The Jetsons than for Mad Men. Whatever you call Nelson’s work, it has a timeless, pleasing, subtly droll aesthetic that is easy to live with. My wife and I have a hanging Bubble Lamp H-727 that I just hit my head on. And a Ball Coat Rack that I can barely see because of the jackets and hats. They’re Vitra reproductions, of course, but I can’t tell the difference.

The show has a sumptuous, eponymous hardbound catalogue with photographs and histories and essays. A steal at $98.00. Or you can do what I did. Walk ten paces to the lovely museum library and review the catalogue to your heart’s content. There are also well-chosen books by and about Nelson, including his brilliant “How to See” and “A Guide to Reading Our Man-Made Environment.” This is a great season for a walk around the grounds, too.