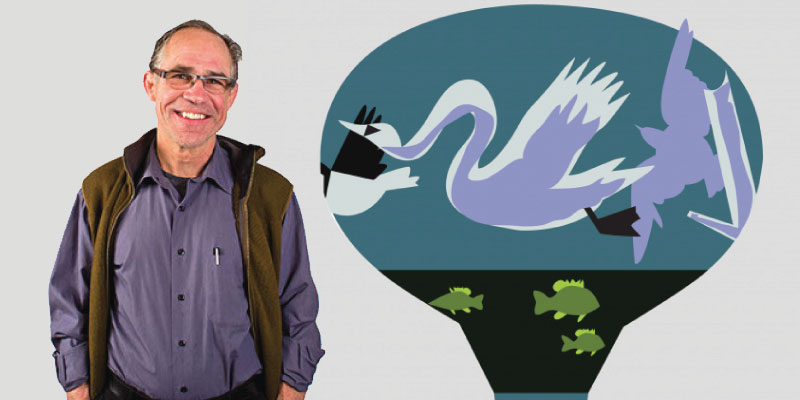 Bill Burgard calls himself a “freelance illustrator and designer.” That’s true, but it’s so understated as to be misleading. Bill Burgard is a force of nature in Ann Arbor’s art world. He lectures at The University of Michigan’s Stamps School of Art and Design, where he earned his Bachelor of Fine Arts degree in 1979 and joined the faculty in 1993. He was hired to teach illustration, but is now a sought after core drawing instructor. Burgard teaches courses on observational skills and on technical skills (Note to all Stamps students:  seek out Bill Burgard.  Note to all Stamps parents:  tell your kids).

Art in the Sky

Burgard recently won the Ann Arbor “Art in the Sky” public art contest to design the 500,000 gallon steel tank water tower on Manchester Road when it is painted this summer. You may not have noticed it but you’ve seen the tower a million times, just south of the split of Washtenaw Avenue and Stadium Boulevard. Keep an eye on it starting in June and behold a sky-mural as it comes to life. The Matisse-like design imagines the Huron River, the primary source of Ann Arbor’s drinking water, including images of swans, cranes, woodpeckers, hawks and many bluegill fish. It will be realized in teals, purples and greens, with black and white highlights, and is destined to become a major Ann Arbor landmark.

“I’m really excited and proud of it,” Burgard told me.  “I live nearby and it was important to me to have a say as a part of the community.”

You may not have noticed but you’ve seen Burgard’s work before. For twelve years he was the art director of the Ann Arbor Summer Festival, in charge of both indoor and outdoor venues. He also participated in the Ann Arbor Painted program, painting the bus depot on Huron in a style reminiscent of Edward Hopper’s Night Hawks late-night diner scene. He is involved in charitable causes, donating work for projects such as last year’s (and 20th annual) Prison Creative Arts Project, which brings art and creativity to Michigan’s prisoners and exhibits the best in show each year at the Slusser Gallery in the Stamps building. Burgard has also worked with Sleeping Bear Press, Ann Arbor’s beloved publisher of children’s books.

Burgard makes his big bucks doing commissions for major corporations. Starbucks, Sports Illustrated, and University of Michigan Health System, where his large-scale mixed-media wall displays, comprising typography, illustration and three-dimensional materials, are on permanent public display in both the medical school and the hospital. Burgard has become increasingly called on to execute portraiture, commissioned to honor major donors and researchers who have achieved internationally recognized excellence (five alone in the Department of Gastroenterology). The portraits reflect each individual’s projects and contributions to the field. The portrait of Thomas Wang, M.D., Ph.D., for example, celebrates his work in confocal and multiphoton endomicroscopy. I don’t know what the hell that is either, but as a work of art the portrait is enthralling. Each portrait is painted in oil on a gessoed wood panel, a centuries-old technique. The narrative illustrations are in mixed media on paper. The final assembly of images using Illustrator and Photoshop is realized on heavyweight archival paper.

In 2010 Bill became an associate artist (not illustrator) for the United States Mint, and has created commemorative coins honoring Helen Taft (First Lady to President William Howard Taft, 1909-1913), and the 200th anniversary of the Star Spangled Banner. The United States mint employs only the best and brightest, which brings us to the age-old question of the difference between art and illustration. As George Orwell pointed out in 1946, “In certain kinds of writing, particularly art criticism, it is normal to come across long passages which are almost completely lacking in meaning.” Is Norman Rockwell’s work illustration while Jackson Pollock’s is art? I suppose when art critics are paid by the word, it is only natural for them to go on talking. William Bergard  is an artist, and we’re lucky to have him around.