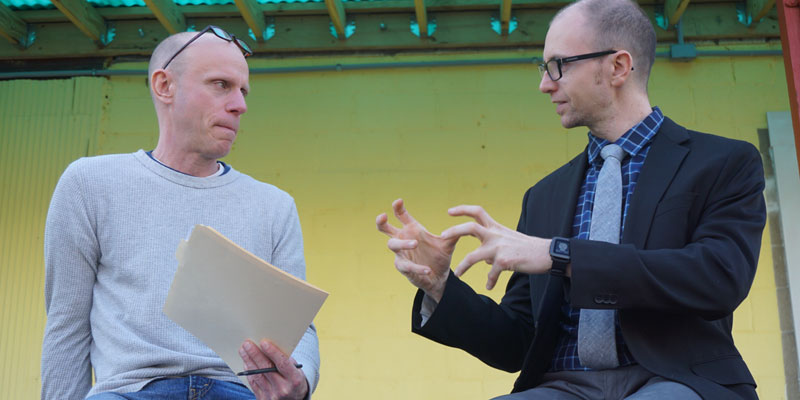 Opening April 22 and running through May 15, Theatre Nova will present the world premiere rock musical Irrational, the joint creation of playwright David Wells and composer R. MacKenzie Lewis. Wells will be familiar to local audiences from his plays, Brill and County Line, which ran at the now-defunct Performance Network Theatre in 2013 and 2014, while Lewis has composed, arranged and music directed for many local shows. His work has also been heard in a number of productions Off-Broadway and at the Kennedy Center.

Irrational will be directed by Theatre Nova’s founder and artistic director, Carla Milarch, who has acted in and directed many plays and musicals at the Performance Network. Current sat down with all three of them to talk about Irrational.

Lewis: The show is about the ancient Greek, Pythagoras who as legend goes, was a bit of a cult leader. He lured his followers in with the perfection of rational numbers and ratios. He collected their money and had a massive following. He was a rock star. This is where the fun comes in.

Wells: Turns out that Pythagoras was not only a mathematician and philosopher, but he was also, I think, a bit of a con man. He led a fervent following of Pythagoreans who believed that divinity was found in ratios, i.e. rational numbers. When one of his Pythagoreans discovered irrational numbers, Pythagoras had the man killed in order to protect their world-view, or perhaps his fortune.

Wells: I definitely agree that there are present day parallels with science and religion. Part of what interested me about the story was thinking about the lengths that people will go to deny new information that conflicts with a way of thinking that they’ve invested themselves in.

Milarch: I think it’s an especially topical piece this year, because, even though it’s light-hearted and fun, it also has this political edge that’s very relevant right now. The Pythagoreans are “the establishment” and no one questions what they do. You either fall in line or face the consequences. Until this young man comes along who says, “No, that’s not how the world works, your theory is flawed. It’s actually the rational that’s crazy!” He flips the entire world upside down. But there are consequences for speaking out against entrenched worldviews. He faces an incredible amount of cynicism from everyone around him about the world’s ability to be different. I think there are tremendous parallels to a lot of what’s going on in the current presidential race.

Tell us about the music.

Lewis: Most of the music is based in the rock genre but influenced by everything under the sun. There’s some 1970’s rock anthem feels, some hip hop influences, a little angsty punk, and a few Burt Bacharach moments, to name a few. I wasn’t trying to capture the sound of ancient Greece, but rather capture the feeling the characters are going through at any given moment.