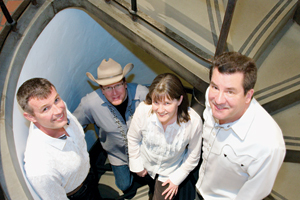 Bill Bynum and Co.’s new CD is titled Less is More. If you had to come up with a nutshell description of their music, that phrase would do nicely. Adjectives such as genuine, authentic, sincere, satisfying and pleasing would also be useful in any longer narrative about the group and their music. (Showy, flashy, glitzy, or extravagant would serve no useful purpose, except as antonyms.) These folks are the real deal. They sing and play a blend of country, bluegrass and old timey, with some gospel and honky tonk thrown in for good measure, and they do it all so naturally, so unpretentiously, that you can really relish and savor their fine music, rather than merely be impressed by it. (Although it’s easy to do that too.)

Bynum’s songs often evolve from and revolve around some of country music’s staple themes—bibles and bars, prisons and trucks, the good old times now gone, and loves that have turned out bad. (Thankfully, his songs, unlike some current country, don’t glorify drinking to excess, or swearing and swaggering.) Instead, his lyrics often offer fresh, noteworthy words and rhymes on familiar subjects. In the title song, “Less is More,” a heartfelt ode to a childhood and a time now long gone, he writes poetically and powerfully of the poverty that was part and parcel of those days, “God was good, but not always giving,” and “We never let a penny hit the floor.” “Jubilee Road” takes another nostalgic look back, “Yesterday’s gone, don’t you understand,” and burnishes a familiar chestnut to a new shine, “In my mind I live there still.” 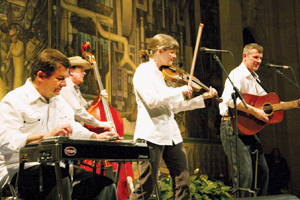 “Lovin’ You,” a song that won Bynum first place in the Metro Detroit Songwriting Showcase, is a reflective paean about a failed love. Filled with regret, but no resentment, it heals with a measure of gratitude, “At least I got to spend my time with you.”  “Sinners and Saints” has the stunning hook, “Every sinner has a future and every saint has a past,” and ends even better with, “There with Him awaits our future, here today we make our past.”

The Company of BB&C is good company indeed. The trio of Chuck Anderson, bass, Mary Seelhorst, fiddle and John Lang, steel guitar, supply, along with Bynum, plenty of pitch-perfect three part harmonies (they sometimes gather around a single microphone, like many of the traditional country performers used to) and also the sparkling solos that will set your toes tappin’ and your hands clappin.’

Bill Bynum and Co. will celebrate the release of their second CD with a concert at the Ark on June 7th and will also appear at the Ann Arbor Summer Festival’s Top of the Park series on June 28th.