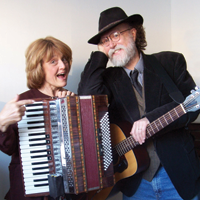 If the old saying, laughter is the best medicine, is true, then listening to a Lou and Peter Berryman concert ought to cure about anything. The pair write and sing the funniest songs, with the highest laughs-per-minute ratios you’re ever likely to chuckle. The Berrymans, performing together for more than thirty-five years, have released eighteen recordings and continue to write prolifically—their songbook contains 197 songs, so far—on perhaps the widest, and wildest, range of subjects of any songwriters. (My family and I saw them a few years ago and still crack each other up quoting the chorus of their song about an inept ventriloquist. “Kleedonklidee…” Who writes memorable songs about inept ventriloquists?)

If you feel the need for categories then label them as folk musicians who sing folk songs. But really, with their multi-layered complexity and craftsmanship, their songs spring as much or more from Tin Pan Alley and Broadway as they do from the folk tradition. Peter writes the lyrics; some of the smartest, most clever, startling, yet inevitably juxtaposed phrases from any wordsmith out there. Lou writes the melodies; deceptively simple sounding, until you listen closer and see how marvelously they fit the words. And then there is her trademark ability to create chord progressions and melodies that, as in the best Broadway duet tune tradition, allow two distinct melodic and rhythmic lines to sound simultaneous. No mean trick, yet she’s managed it spectacularly on a number of their songs.

A long time ago, the Berrymans were married for seven years. They have been divorced since 1974 but their musical children, their songs, are products of a perfect marriage between lyrics and music. “Fourth Most Visited State”, the opening song on their most recent CD, starts with “We’re Wisconsinites, we don't care if / You have great big purplish mountains.” After detailing the famous and spectacular landmarks, historical sites and other notable qualities of the other forty nine states, the song ends with the self deprecating line about their home state of Wisconsin, “We have bowling shoe rental germicide spray / For customer health / And we’re the Fourth Most Visited State by automobile.”
And don’t think it’s only the frivolous that tickles their funny bones. Their topics include: homelessness, nuclear war, aging, the one-percenters (“How We Can Sleep At Night?”) and songs that categorically defy categories. “Quarter After Blues” is a late night stream-of-consciousness tour de force. I overloaded something / in the brain no doubt / I went ‘n’ blew the section / Where it sorts things out / I musta reached the point / Where the circuitry melts / and everything reminds you of / Everything else.”