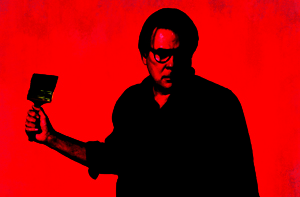 The Performance Network’s next production is Red by John Logan. The play is about the prominent modern painter, Mark Rothko, and focuses on the period in Rothko’s career when he was working on his gigantic Four Seasons restaurant murals. The play won the 2010 Tony Award for Best Play. Its Ann Arbor run, April 19 – May 27, is directed by Carla Milarch, the Network’s Executive Director.

Tell us about the play.

Milarch: This play juxtaposes the work that Rothko and his assistant do as they create the painting—you see them prepping the canvas, putting the base coat on; there’s this wonderful scene where they’re doing almost a balletic piece as they’re painting the canvas together—and you hear them talking about the ideas behind the art. There’s also the added layer of music. Rothko favored Schubert and Mozart to paint to, so there’s a record player on stage and we hear these pieces throughout the course of the play.

Rothko says in the play, "There is only one thing I fear in life, my friend: One day the black will swallow
the red."

Rothko used a lot of red and black in his painting, and his later works were black. But if you look at a Rothko painting at the distance that he suggested, eighteen inches away, there’s obviously much more to them than just black. Rothko committed suicide, and his family and people close to him were all really mystified as to why he did that. I think that whole black swallowing red is the playwright’s way of trying to puzzle out what it was that led him to that.

It’s a two-person play. How is directing something small different from directing a large cast?

I’ve done the big musicals at Network for the past five years and I was starting to get scared I wasn’t going to be able to do these intimate, detailed, nuanced pieces. So I was very excited and a little bit nervous. I’m really looking forward to finding the human element in the play. They talk a lot about art, but there’s a whole sub-textual level that’s about two men struggling for status. Rothko’s assistant is a younger guy, a contemporary of Warhol, Lichtenstein — that next generation that was coming in to replace Rothko. The two men develop almost a father/son relationship, destroying each other, supporting each other. That’s the level that I’m most excited about, because it’s the most hidden. We’re looking for that.

Your actors will be creating a painting on stage?

Every night there is a huge new canvas. They’ll have new white T-shirts, and they’ll get covered with paint.