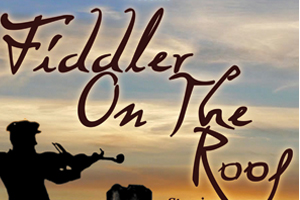 The Encore Theatre in Dexter will present Fiddler on the Roof, opening on July 12th and playing through August 12th. The Encore, founded in 2009 is concluding its fourth season of very high quality musical theater productions with casts consisting of a mix of professional Equity actors and local amateurs. Their production of Fiddler will star Stephen West, renowned opera singer and professor of voice at the University of Michigan. Dan Cooney, one of Encore’s founders, its producing artistic director, and himself a frequent actor in Broadway musicals, will direct. Cooney is especially qualified to direct Fiddler, having toured nationally in a cast with Theodore Bikel, the legendary Broadway star who originated the role of Captain von Trapp in The Sound of Music, and also with Sammy Dallas Bayes, who was Fiddler’s original dance captain on Broadway.