A drop of sweetness 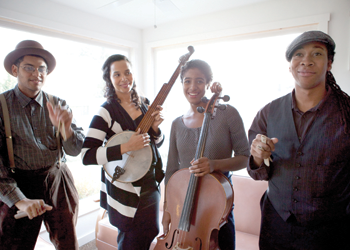 The Carolina Chocolate Drops return to Ann Arbor on Sunday, November 18 for The Ark’s  annual Fall Fundraiser. Essentially a scaled down version of the famed coffeehouse’s January Folk Festival which always brings in many of the top names in traditional and contemporary folk music, thus ensuring that there’s something for everyone’s taste, the Fall Fundraiser enlists a single artist or band to accomplish the same purpose. The CCD fit that bill admirably. If you’re a purist and delight in hearing American music as it likely sounded when it was brand new 150 years ago, you’ll be in the right place. If you prefer songs and performances that speak to today’s issues with an acoustic sound that punches way beyond its weight, get in line. If you just plain like music and could care less if it’s old or new, trad or rad, as long as it’s played superbly and with passion, don’t plan anything else for that night.

Which doesn’t mean that CCD spatchcocks together a mishmash of something for everyone. There is a very satisfying coherence to their wide-ranging work. The band started out about a half dozen years ago as a trio that faithfully researched, studied and performed the authentic sounds of African American string bands of the late 19th and early 20th century. Their 2010 recording, Genuine Negro Jig, (the title comes from a mid 1800’s fiddle tune by that name) which won a Grammy, featured Rhiannon Giddens and Dom Flemons along with Justin Robinson on a kaleidoscope of Southern string sounds. Their new recording, the evocatively titled “Leaving Eden” shows them expanding into jazz, blues and even contemporary songwriting.

Giddens and Flemons are still the heart of CCD, but their Ark show will introduce two new members, Hubby Jenkins and Leyla McCalla, who are featured on their new recording. Jenkins brings some hot guitar picking and adds another couple of pairs of bones, (more about that later) to CCD’s percussion bag, while McCalla mixes in her cello, an instrument not often seen or heard in string band music, but one that she manages to make totally at home in CCD’s sound.

Giddens is an Oberlin classically trained musician with serious opera creds (and therefore a real flair for the dramatic) and impeccable but by no means precious technique on vocals, fiddle and banjo. McCalla contributes a music degree from New York University and wide experience on the New Orleans popular music scene. Flemons and Jenkins, both of whom honed their skills as buskers add more of the raw, in your face showmanship that is a hallmark of CCD shows. Flemons, who is one of the most graceful and tasteful bones players ever to play that ancient percussion instrument, is now sharing the bones spotlight with Jenkins. Their duets are visual and aural pyrotechnic delights.
Ann Arbor audiences have thrilled to the CCD on their previous visits to the Michigan Theater and Hill Auditorium. Seeing them up close and personal at the Ark is likely to be an even bigger treat.