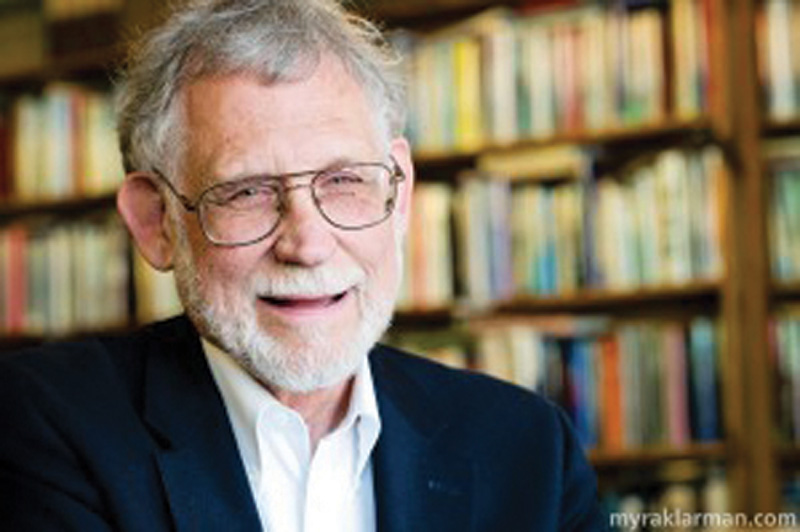 The 36th annual Ann Arbor Antiquarian Book Fair returns to the Michigan Union Ballroom on Sunday, May 18. Forty booksellers, map and print dealers from across the country will bring first editions, signed copies, old and collectible books, children’s books, all types of Americana, and more. We caught up with Jay Platt, owner of Ann Arbor’s West Side Book Shop and one of the Fair’s founders and its long-time director, to discuss the fair and the book business.

Platt: Back in 1976 the American Library Association was going to have their rare book conference here in Ann Arbor, so we thought, naively, we’ll put on a book fair for them. We’ll invite some other dealers and the librarians will come and buy a lot of books. This was in July, it was in the Michigan League, it was hot, there was no air conditioning, it was a three-day fair, and we had a reception for the librarians on opening night. We had about 14 dealers come in. I don’t think we sold anything to the librarians, they just came and drank wine and ate cheese and left. (Laughter) The next two days we kind of sat around looking at each other and not many people showed up. So we skipped a year and then we said, ‘Ah, let’s try it again’ and we moved to the Michigan Union.

One year we got our numbers for the fair mixed up, so instead of year number nine, we did year eight twice, and that’s why this year is only number 36, though we’ve done 37 book fairs.

What has set the fair off from others, other local fairs at least, is the number of dealers that are members of the Antiquarian Booksellers’ Association of America (ABAA), which is kind of the premier antiquarian bookselling organization. About a third of the exhibitors are members. It’s good because it really increases the quality, but we do have a wide range of books. I’ve had people who say, “Oh, it’s just going to be really old and rare books,” but there will be other, certainly very accessible books, and a lot of price ranges.

Right. I believe in having a wide range available. Book fairs like this all started around the same time, in the mid-seventies, but before that back in about 1960 the ABAA put on the first American Antiquarian Book Fair in New York City. They did it for a week and it was really educational. They wanted people to come in and ask questions and learn about books. Now it’s much more about selling. We also, as dealers, like that interaction, but it’s mainly selling. These fairs cost money to put on, dealers travel, they want to sell things.

How did you get into selling old and used books? What you do defines niche.

When I went to school here at the UM in the 60s I was in engineering. I got a degree in Naval Architecture. Around 1970, a friend of mine and I were in New York and he took me into a bookshop. He was interested in old books. I remember him asking for a particular book, one that I’d never heard of before, and the dealer, he had, you know, 50,000 books, and he went right over and got it, and I said, “How did he do that?” (Laughter) That’s amazing.

And now you do that.

Yes, now I know. (More laughter) It’s very visual. You need kind of a good memory. I’ll have a book in a pile, I’ll know where it is in the pile and I can go over…

When we got back from New York I got a job at a bookstore, Student Book Service on South University, and then over at Ned’s Bookstore in Ypsilanti. I kind of stumbled into it. I had nothing else to do. It all came together. I started learning more about rare books. On my own I was trying to learn the rare book business, subscribed to a magazine called the Antiquarian Book Weekly, ordered catalogs, went to book sales, and then I worked at David’s Books. He hired me as the rare books specialist. I knew something but not that much. It was a good learning experience. And then I opened West Side Book Shop in 1975. We signed a lease, built some shelves, put the books up, been there ever since.

How have things changed? Are you computerized?

The general answer to your question is no.

The image of an ancient book alongside an old computer… it's a bit incongruous. (Laughter)

I do have some books online, but nothing that I take to book fairs is online. I always feel that it’s much more important that people come in and really handle the books, discover something.

What about bookstores going out of business? Kindle, Amazon: how do those factor into part of the book trade?

Certainly a factor. They’ve certainly had an effect. A lot of people consider Amazon the enemy, and they have hurt independent stores. The new book business is different than the antiquarian and the used book business. It probably affects the rare books business the least, because it would be somehow foolhardy to buy a rare and expensive book online when you don’t know who you’re dealing with. If you’re just buying a paperback or a new book, you know what it is… that’s affected independent bookstores, but I think there’s been kind of a resurgence…

Yes, I think they’re going to do ok. I think people still want that interaction with booksellers. I do know that some people… they see something they want, they look it up, “Oh I can get that cheaper online”… and that’s annoying, (Laughter) to say the least. I’ve seen that at book fairs sometimes.

As far as Kindle, I read a statistic that something like 90% of what’s on Kindle are romance novels, mysteries, throwaway books, the books you buy as a paperbacks, books that you don’t keep, whereas what we hope to foster is that people buy books to keep. It doesn’t cost a lot of money to be a collector of books. You buy a book and you intend to keep it. You’re not going to keep a Kindle copy of something.

If you took a 500 year old book, you can pick it up and know what it is, you can read it, and conversely, you could take someone from 500 years ago, if they looked at a modern book, they would know what it is. It [a book] doesn’t take any batteries, the technology hasn’t changed. On the other hand, I just got something, some Jack Kerouac recordings, and they were on cassettes. When I bought it, someone asked, “Why are you buying that?” and the meaning of the question was, no one can play it, no one has a cassette player any more. Technology becomes obsolete. Of course, you can probably find a tape deck to play it, but most people won’t have it. And that’s true of most of these technologies. Look at an e-book reader, you could probably say in five or ten years it’ll be something else and you’ll have to move everything over to a new platform. Books don’t change. And bookstores, I’ve been a really strong believer in having open bookshops, having an open, public presence, as opposed to people buying just out of their home. That’s how people get introduced to the trade, that you can even buy rare used books. I think someone did a poll, maybe 20 years ago, and they interviewed people coming out of new bookstores, and they found out that 90% didn’t even know you could buy used books. (Laughter) A lot of times towns the size of Ann Arbor, or even larger, don’t have a decent used bookstore. We’re lucky that we have four or five.

Could a store like yours do well in a non-University town?

It would be different. It would be hard to go in and establish that culture. You could do it, but it would take awhile.

You’d need deep pockets, and of course everybody in the used bookstore business starts out that way. (Laughter)