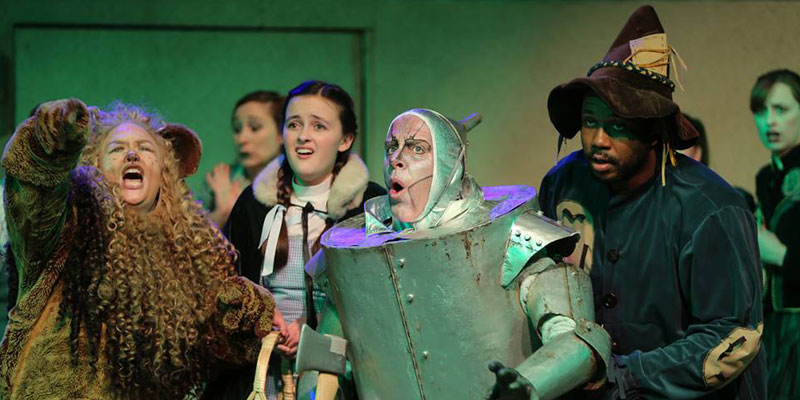 The Encore Theatre in Dexter will present the The Wizard of Oz from November 27 through December 23. The musical is based on L. Frank Baum’s 1900 novel, The Wonderful Wizard of Oz, and the beloved 1939 film version starring Judy Garland.

The score includes all the familiar, classic songs from the movie, including “Ding Dong (the Witch is Dead)”, “If I Only Had a Brain”, “If I Only had a Heart”, “We’re Off to See the Wizard”, and of course, “Over the Rainbow”.

Thalia Schramm, who has acted in over twenty productions at the Encore since it opened in 2009, and has also served as its Associate Artistic Director, now works there as Casting Director and Program Director. Schramm will direct this production, her second directorial assignment at the theater.

We sat down with Schramm to chat about the upcoming performance.

Ed Note: This transcript has been lightly edited for clarity.

Current: How is the musical, The Wizard of Oz, the same—and different—from the movie?

Schramm: The script we are using is actually very close to the movie—it was developed for the Royal Shakespeare Company in 1987.

What special challenges come with presenting this story on stage, when we all have the actors and images from the movie burned into our minds?

We are taking a more abstract approach to the show. I love the idea that Dorothy is creating this whole elaborate story in her brain, and having all the big iconic portions of the show come out of things she sees every day on her farm in Kansas. It will definitely be a collaborative effort between all our awesome designers!

How will you do the cyclone? I know, you can't give too much away, but tell us what you can about how you’ll manage without Hollywood special effects.

Lots of light and movement.

Will you have a live Toto?

Oh boy, will we! We will have the same dog for all the shows. I'm not sure of the exact breed yet, but a small one.

Who is your musical director and what is the instrumentation of your pit band?

Our Music Director and Orchestrator, R. MacKenzie Lewis, has directed music for the Encore a number of times in the past, and is just the best. He served as musical director for Spamalot for me last fall, and recently also did South Pacific for us. We are using both live instruments and an instrumental track.

Tell us about your cast.

We will have a cast of about twenty, including those Munchkins! We will have three teenagers play Dorothy, Maeve Donevan, Mariah Colby, Jennie Rupp, and each will perform in seven performances. Daniel A. Helmer, who has a BA from EMU, an MFA from University of Essex, and now teaches at EMU, will be Professor Marvel and the Wizard of Oz. Lauren Norris, who has a BFA from Manhattan Marymount and an MFA from Royal Scottish Conservatoire, will portray Glinda and Aunt Em. Wendy Katz Hiller will be Miss Gulch and the Wicked Witch, Dan Morrison will be the Tin Man, and Gayle Martin, who teaches dance at WCC, will be the Cowardly Lion.

The show is definitely family friendly, and there will be lots of special effects. I think this is an ideal show for families to attend together—it’s probably appropriate for ages seven and up.