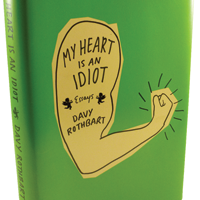 You've got to suffer if you want to sing the blues. That’s what David Bromberg used to sing and, true or not, it’s certainly a widely held belief about how artists create their art. And certainly there is enough suffering detailed in Davy Rothbart’s new book of essays, “My Heart is an Idiot” to inspire a lot of blues singing; and sing—or, more accurately, write the blues he does—brilliantly. But the other long cherished cultural belief about artists is that they somehow live more fully, more joyously, and adventurously than the rest of us. And Rothbart’s tales certainly don’t belie that belief either.

Rothbart is the creator of Found magazine, author of the short story collection The Lone Surfer of Montana, Kansas (of which, no less a literary light than Arthur Miller wrote, “Davy writes with his whole heart. These stories are crushing.”) and a frequent contributor to NPR’s This American Life.  Most of these essays are heartbreak hotel stories. Rothbart wears his heart on his sleeve, gets it crushed frequently and squeezes his heart’s blood out through his pen. And, bolstering the aforementioned belief about artists having exciting lives, these are the kind of stories that rarely happen to those folks couch potatoing at home, happily (or unhappily) married, doing the nine to five grind. Or perhaps more accurately, they only happen to people as open-hearted and generous as Rothbart, as willing to interact with all manner of people, and experiences, rather than just the familiar, the comfortable and the safe.

But it’s one thing to live like that, and quite another to be willing to be as honest and self revealing about your life, to show the moments you’re proud of as well as the ones you cringe at when you recall; and it’s yet another thing entirely, to be able to write of those truths in as vivid a you-are-here-with-me-now style like Rothbart’s. His writing is a dazzling mix of the most current street slang, American Midwest plain talk and learned literary polish. There are whole pages, for example in the essay, “99 Bottles of Pee on the Wall” (doesn’t the title alone make you want to pick up a copy?) that will have you laughing helplessly, followed by pages in the same essay that will make you smile sadly at people’s gullibility and ability to delude themselves. There are striking literary images on nearly every page. Describing an old black man, Rothbart writes, “The skin on his face was pulled taut around his cheekbones and eye sockets, as leathery and soft looking as one of Satchel Paige’s baseball mitts in its display case at Cooperstown.”

These are quintessential road stories about America and Americans. In all the essays, but especially in the final, “Ain’t that America?” Rothbart’s palpable affection for all the people he encounters, for all the two lanes and small towns, cities and highways, is evident in this heartfelt love song to his country and ours. Yes, at times Rothbart’s heart is an idiot, but at all times it is loving and lovable.
Davy Rothbart and his musician brother, Peter will once again be criss-crossing the US and parts of Canada this fall on My Heart is an Idiot/ Found's 10th Anniversary Tour.