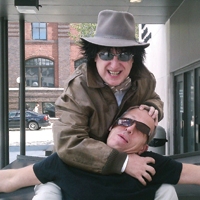 Emergent Arts is midway through its inaugural full season, having presented “The Odd Couple” in the spring, and “Yankee Trader” in the summer. Coming in October is Emergent Arts Director, Tim Henning’s new play based on the Robert Louis Stevenson classic The Strange Case of Dr. Jekyll and Mr. Hyde.

Why did you start Emergent Arts?
Henning: The major reason for Emergent Arts is that my life so far has been a mix of many things, but theatre has been a constant. I have performed in, directed or produced over 150 plays over the years and made almost nothing at it, but having been bitten by the bug while still in my teens, I’m afraid it’s too late for a cure now. So I’ve decided to produce plays, with the hopes of developing my own.
I have lived and acted in Chicago, Cincinnati, New York, San Diego and Los Angeles, and now back in Ann Arbor. So far I have also managed to have, as they say, an “interesting life.”  Emergent Arts to me is a progression in that life. Ultimately it is the continuance of my personal exploration of what I find interesting in theatre. It’s my personal graduate school in a way. I am learning how to put together a theatre company from scratch. And I think that now I have a few things to say that an audience might find entertaining.

Tell us about your new play, “Hollywood and Hyde.”
My intention is to take a familiar story of good versus evil and twist it a little, both in tone and structure. I’m also planting it in modern day Hollywood, where it has become almost impossible to tell the Jekylls from the Hydes. In my version, Henry Jekyll is an out of work actor who can’t catch a break, a direct descendant of the “actual” Jekyll in Robert Louis Stevenson's original story.

I treat the characters in Stevenson's story as though they are historical figures upon whom the story was based. Some of the characters in my play are their descendants, including Jekyll and his best friend and confidante, Gabby Utterson, a gal pal of Jekyll’s who happens to be the offspring of John Gabriel Utterson, the source of the whole story to begin with. Gabby starts to notice strange and violent things happening around her actor friend, and she and some of the other characters begin to wonder if fictional history is repeating itself. Quite a bit of the action of the play takes place in the bar where they hang out, which I’ve modeled somewhat on an actual bar in Hollywood where lesser lights in the Hollywood firmament drink and dream.

“Hollywood and Hyde” opens, appropriately enough, on October 31st and runs through November 4 at the Riverside Arts Center in Ypsilanti. Emergent Arts’ final play of the season will be Henning’s adaptation of Charles Dickens’ “A Christmas Carol,” presented at the Arthur Miller Theatre December 20-23. www.emergentarts.com