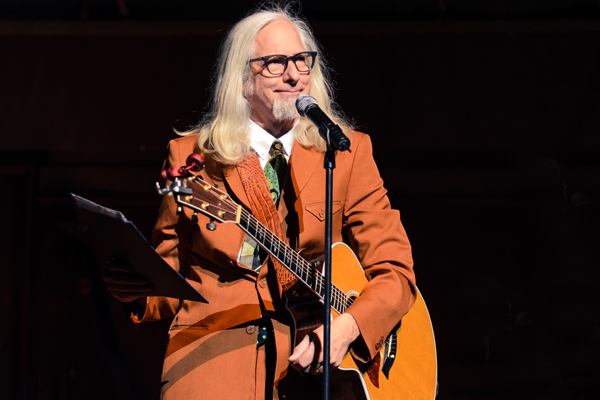 The next time I go to hear Heywood Banks do his standup comedy concert—which will be on April 28, when he comes to The Ark—I’m bringing along aspirin, or maybe even some stronger prescription strength pain-killer. The last time I saw him, when he served as MC for the Ann Arbor Folk Festival in January, I hurt myself doubling up and falling down laughing. This time I’m also going to pack a box of Kleenex. In January I had tears running down my face, and other bodily fluids emanating from my nose as I cackled, chuckled, giggled, guffawed, snickered and snorted my way through his hilarious jokes, monologues and hysterical songs.
For anyone who has already heard Banks, to say that he’s unique, is to state the patently evident. You can’t even really compare him to the few other comics like Stephen Lynch or Jimmy Fallon or Bo Burnham who use music in their acts. For those who have not yet seen him, you can try to describe him by saying that he’s a comedian, who is also a guitar-playing songwriter (and for playing a toaster—with forks—and singing an ode to toast, “Yeah, Toast” which includes some French lyrics about, what else? French toast.) Unlike many comics, he does not rely on F bombs, or for that matter, on any other swearing or sexual innuendo. A few years ago, when Banks was in town working at the Comedy Club, a friend of mine took his pre-teen kids and two of their young friends to hear him. My friend had carefully researched Banks’ material beforehand and was sure it would be appropriate. Banks didn’t let him, or his kids, down.
But this is not kid stuff. You start laughing at some of Banks’ material because of his delivery and because you think you know what the punch line will be. Then he pulls the rug out from under himself and surprises you with a verbal pratfall. For example, his falsetto delivery on one song, and the repeating first line, “I’m wearing pink underwear and a teeny tiny sweater,” lead you in one direction; you think you know who his character is and where he’s going with that line, and then like the fine musician that he is, he delivers the second and last line with perfect musical and comic timing, “I really need to learn to do my laundry.” (I’m paraphrasing, but you get the idea.) Or there is his song about driving through Iowa, “Corn, corn, corn, corn, look there’s a tree! Corn, corn, corn…” It doesn’t matter if you’ve heard these songs or skits before — Banks’ delivery will make you laugh even when you know the lines as well as he does. See you at Banks’ show at the Ark. I’ll be the one with the Excedrin bottle and a lot of used Kleenex.