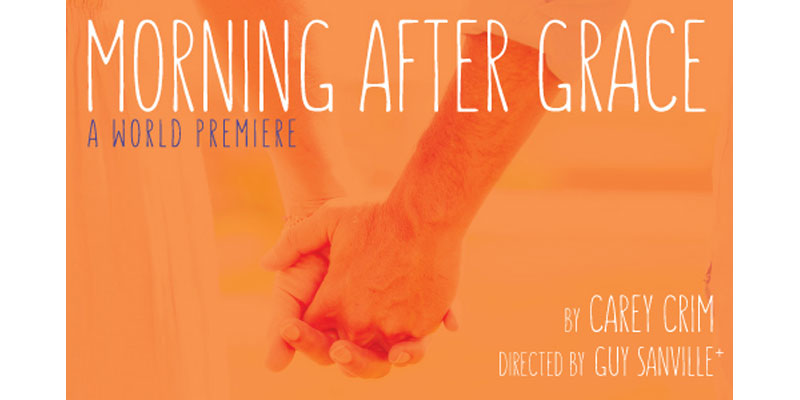 The Purple Rose Theatre opened its 2016-2017 season with Carey Crim’s Morning After Grace. This is Carey’s fourth play to be produced at the Purple Rose and Guy Sanville, who will direct, talked about the play and how new plays make the journey from script to stage.

Current: This is a world premiere. Please talk us through the process; from the first time you see a script to the final staging.
Sanville: You read the play and you think, ‘OK this is something that has great potential.’ If you don’t know the playwright, you bring the playwright in and you see how they are, because as we always say, “We’ll make the play as good as the playwright lets us.” We see if we’re compatible, if we can work together. Then we’ll do a table reading, just get actors around a table, no audience, because you need to hear plays. If we like what we hear, then we do what we call a greenhouse, a new play workshop. Those last anywhere from a couple of days to a couple of weeks, and we’ll do one, two or three of those.

Before an audience?
Not necessarily. Most times we do end them with a public reading at the Chelsea District Library. We do talkbacks after that, and we keep working. Then, if we commit to the play, we get together on a rehearsals draft, which is important because that’s the draft that we agree to go into rehearsals with, and any changes after that have to be agreed on contractually by the writer and the producer. Good writers, the best ones that I’ve worked with, are pretty ruthless with their own material; they want to get it right. And writing is really re-writing. So usually by the time we produce something it’s not uncommon for the person to have written several drafts, three, four, even seven hundred pages.

What’s the final number?
One hundred, a hundred and ten pages…

And they’ve probably written several drafts even before you see one.
It depends on the writer. When I see Jeff Daniels’ plays it’s usually his third, and there’s usually another three by the time we open. That can involve cuts, new scenes, changes in dialog, sometimes characters come and go…

Tell us about this play.
As soon as I read it I knew we wanted to do it. Right away I started laughing, from page one. When the play starts there is a man and a woman who have obviously had a fun night. They met the day before, there was a lot of drinking involved, and they ended up at his place. She wakes up, makes a phone call and then… she can’t find her clothes and she opens a closet and sees a whole bunch of women’s clothing there.

And the plot thickens…(laughter)
And we’re off and running. It really is a lovely play. It’s a great little story, a farce, very funny. It’s for grownups. It’s about a guy who learns he gets a second chance whether or not he wants one. It’s fun to do plays about seasoned grownups that do fall in love, that do all those things that hopefully you never grow out of.

Morning After Grace runs at the Purple Rose through December 17.