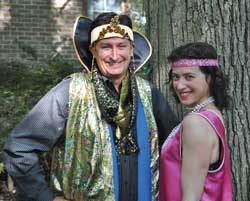 Ann Arbor’s Penny Seats Theatre Company returns for its third season of summer musical theater at the Band Shell Amphitheater in Ann Arbor's West Park with Little Me, a 1961 Broadway hit written by Neil Simon and Cy Coleman, with music by Carolyn Leigh.

Current talked with actress, Lauren London, one of the founders of the Penny Seats—and now its president—about the company and their upcoming production of Little Me.

London will play Belle, one of the leads in this summer’s production.

It’s hard enough to put on musicals anywhere—the Penny Seats do them outdoors.
It immediately raises the question in peoples’ minds, ‘How are they going to do that?’ [Laughter] and that is endearing to us. Being a new smaller theater company we feel we have the flexibility to do some new and interesting things.

Have you had good luck with the weather?
No! Not at all. [Laughter] In fact, one of the reasons we moved our shows a little bit forward so they’re all in July this year, is that historically the weather is a little bit better in July than in August. Out of nine shows last year, two were stormed out. But, it’s one of those things you plan and prepare for. Everybody knows what the risks are going in and that is part of the charm of it, too. You bring bug spray, you bring sunscreen, you bring a hat. You can also bring a picnic dinner and a bottle of wine and make it a lovely summer evening experience. Our ticket prices are only ten dollars. For the same price as a movie ticket you are able to enjoy live theater in the park and make an evening out of it.

Tell us about Little Me.
Really, this is a farce, brilliantly written, with a sparkling script and a beautiful score. And it's so funny. It consists of a series of vignettes that all happen in different locales, in different times, in different costumes. As a company we tend to gravitate toward work that is witty and fun and can be done in imaginative ways—and to musicals that aren’t routinely seen any more.

Is Little Me not produced often because maybe it’s so hard to do what Sid Caesar did in the original production—playing six or seven roles?
Shockingly, we have a guy in our company, Roy Sexton, who is going to try to do the Sid Caesar thing, bless his heart. Roy has acted in a lot of different community and professional theater, is magnificent and has an amazing voice. It’s phenomenal to have him try his hand at Sid Caesar. It’s going to be great.