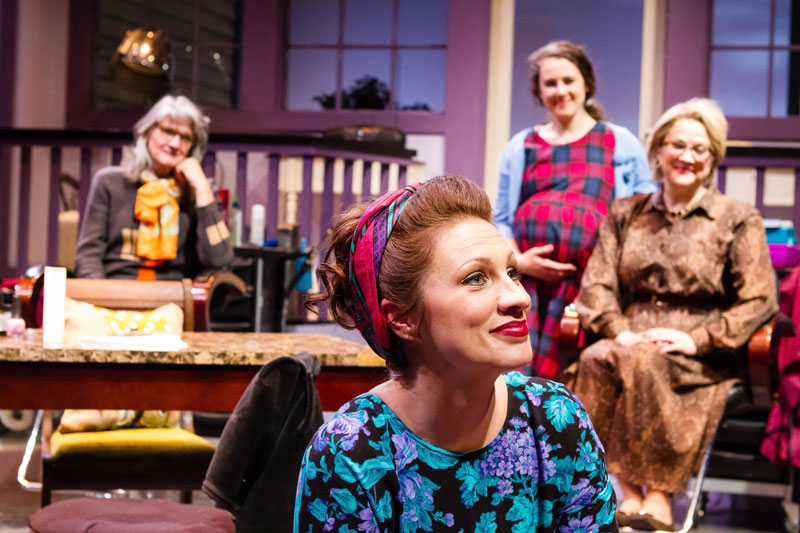 Robert Harling wrote Steel Magnolias in 1987, based on events in his own life, after his sister died of complications with diabetes. In 1989, Hollywood producers made the play into a hugely popular movie. We caught up with Purple Rose’s Artistic Director, Guy Sanville, and actors, Laural Merlington, who plays Ouiser, and who played another role in the play twenty-five years ago, and Rachel Hull, who is making her professional debut as Shelby. We talked about the characters and how the play differs from the movie.

Sanville: It’s a great script. You can tell that they took a lot of time and care in getting it right. The way it uses pain to set up laughs is killer. It uses humor as a window into the human heart like few I’ve been acquainted with. I heard somebody say, “It’s about a young woman, Shelby, who would rather have a half hour of wonderful than a whole life of nothing special.”

Hull: You can look at her and think she’s stereotypical, that we all know this girl. But we don’t. She’s living and giving for this son that she doesn’t even know that she’ll have. She’s so selfless, and I really didn’t realize that until I dove into the play.

Sanville: That’s what I didn’t realize either—and I’d read it a million times. Shelby is really tough. Her body just is not nearly as strong as her heart and her will.

Merlington: It’s not called Steel Magnolias for no reason. Each of these women has had some pretty tough times, they’ve all had a journey and they’re all tough.

Current: Unlike the movie, the play has an all female cast.

Merlington: Not meeting the men is more interesting, I think.

Sanville: Not one woman in this play defines herself by the man that she’s with.

And then there is Ouiser.

Merlington: She’s been in a very bad mood for forty years. (Laughter) Ouiser is reality. She’s quick to point out the dark side of everything.

Sanville: Somebody says, “It couldn’t get any worse.”

Merlington: And Ouiser says, “Of course it can!” (Laughter) When Ouiser comes in, we’ve already met Annelle. The other women are trying to carefully dance around and find out where she’s from and figure out the mystery around her. Ouiser doesn’t pull any punches. “Who the hell are you? And what are you doing here?”

Sanville: “Married or not?”

Merlington: “These are not difficult questions.” (Laughter)

A lot of people saw the movie. Does that pose a challenge?

Sanville: We do a lot of new plays here, and one of the things we work against there is that nobody’s ever heard of them. Everybody’s heard of this play and that helps. But what theater offers is that you’re actually in the room and you’re breathing the same air. When we do it right you’re not just an audience person, you’re living through the play with the actors. This is an American classic, it’s been around for more than twenty-five years, and twenty-five years from now people will still be doing this play. We’re offering people a chance to experience it in a way that they haven’t before.